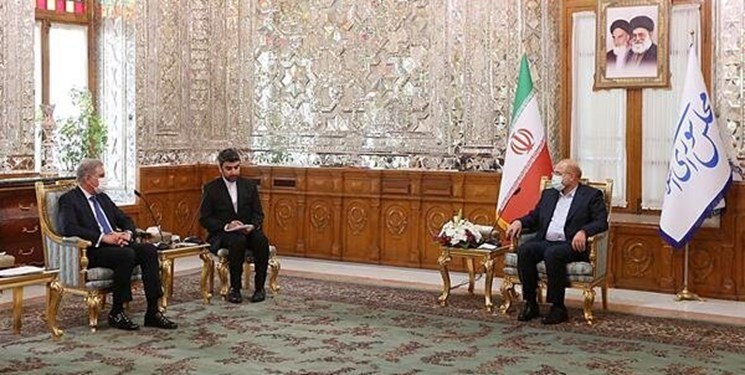 Qalibaf held a meeting with Qureshi in Tehran on Wednesday during which he stressed expanding ties with Islamabad.

In the meeting, Qalibaf said that Tehran is determined to expand ties with neighboring countries.

The Iranian parliament speaker expressed his happiness with the reopening of the third official border crossing between Iran and Pakistan namely the Pishin-Mand Border Crossing on Wednesday in the presence of Iranian and Pakistani officials, expressing hope for further strengthening of bilateral ties between the two neighbors by overcoming the barriers resulting from the sanctions and the Covid-19 pandemic.

Elsewhere, he said that the Islamic Republic is always opposed to any divisions among the Islamic countries, stressing that Tehran always seeks Islamic unity under the banner of the Islamic Umma and rejects any religious and ethnic divisions.

Qalibaf also referred to a recent webinar in which he attended with parliament speakers of neighboring countries of Afghanistan, saying that important ideas for economic cooperation and the fight against terrorism and promoting peace and security in Afghanistan and the region were emphasized during the online meeting.

He also said that after the withdrawal of the United States from Afghanistan, the role of neighbors in helping the country will become more important, stressing that Iran considers cooperation with Pakistan as critical in creating peace in Afghanistan.

The Iranian parliament speaker further noted that Tehran has always had a clear policy toward the Kashmir issue, stressing that the Islamic Republic attaches great importance to the rights of the Kashmiri people.

Qureshi, for this part, said parliamentary ties can bring nations closer to each other.

Referring to the re-opening of the Pishin-Mand Border Crossing, Qureshi said, "Today, a memorandum of understanding will be signed for the opening of border markets, which will strengthen [bilateral] trade and open new border markets."

The Pakistani Foreign Minister also thanked Iran for its stance on Kashmir, saying the Kashmiri people's rights have been violated and the Covid-19 pandemic has added to their hardships.

Referring to the developments in Afghanistan, he said, that neither Iran nor Pakistan want ISIL and terrorism to spread, adding that "we both want peace and prosperity, which will definitely strengthen relations."

At the end of the remarks, the Pakistani Foreign Minister conveyed to Qalibaf the message of the Speaker of the Parliament of Pakistan Asad Qaiser, inviting the Iranian speaker to visit his country.

Qureshi arrived in Tehran on Tuesday on a three-day official visit for talks on mutual relations and the latest regional security issues with senior Iranian officials.

His visit is taking place at the invitation of Iranian Foreign Minister Mohammad Javad Zarif.