Inspired by Nature, Research to Develop A New Load-Bearing Material 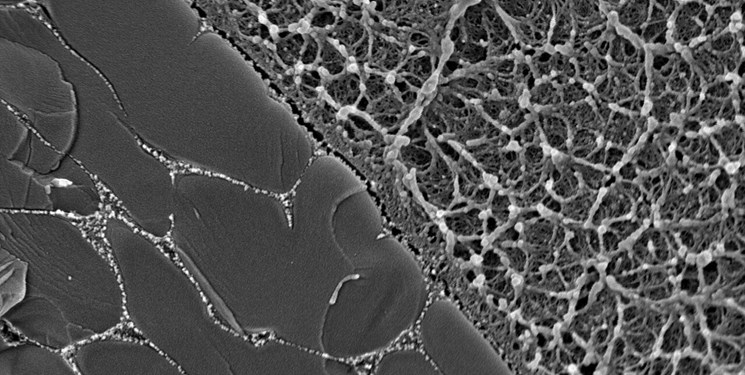 TEHRAN (FNA)- Engineers have developed a new material that mimics human cartilage -- the body's shock absorbing and lubrication system, and it could herald the development of a new generation of lightweight bearings.

Cartilage is a soft fibrous tissue found around joints which provides protection from the compressive loading generated by walking, running or lifting. It also provides a protective, lubricating layer allowing bones to pass over one another in a frictionless way. For years, scientists have been trying to create a synthetic material with the properties of cartilage.

To date, they have had mixed results.

But in a paper published in the journal Applied Polymer Materials, researchers at the University of Leeds and Imperial College London have announced that they have created a material that functions like cartilage.

The research team believes a cartilage-like material would have a wide-range of uses in engineering.

Cartilage is a bi-phasic porous material, meaning it exists in solid and fluid phases. It switches to its fluid phase by absorbing a viscous substance produced in the joints called synovial fluid. This fluid not only lubricates the joints but when held in the porous matrix of the cartilage, it provides a hydroelastic cushion against compressive forces.

Because the cartilage is porous, the synovial fluid eventually drains away and as it does, it helps dissipate the energy forces travelling through the body, protecting joints from wear and tear and impact injuries. At this point the cartilage returns to its sold phase, ready for the cycle to be repeated.

Dr Siavash Soltanahmadi, Research Fellow in the School of Mechanical Engineering at Leeds, who led the research, said: "Scientists and engineers have been trying for years to develop a material that has the amazing properties of cartilage. We have now developed a material for engineering applications that mimics some of the most important properties found in cartilage, and it has only been possible because we have found a way to mimic the way nature does it.

Earlier attempts at developing a synthetic cartilage system have focused on the use of hydrogels, materials that absorb water. Hydrogels are good at reducing friction but perform poorly when under compressive force.

One of the problems is that it takes time for the hydrogel to return to its normal shape after it has been compressed.

The researchers have overcome this problem by creating a synthetic porous material made of a hydrogel held in a matrix of polydimethylsiloxane or PDMS -- a silicone-based polymer. The matrix keeps the shape of the hydrogel.

In the paper, the scientists report that the load-bearing behaviour of the hydrogel held in the PDMS matrix was 14 to 19 times greater than the hydrogel on its own. The equilibrium elastic modulus of the composite was 452 kPa at a strain range of 10%-30%, close to the values reported for the modulus of cartilage tested.

The scientists believe future applications of a new material based on the function of cartilage would challenge many traditional oil-lubricated engineering systems.

Dr Michael Bryant, Associate Professor in the School of Mechanical Engineering, who supervised the research, said; "The ability to use water as an effective lubricant has many applications from energy generation to medical devices. However this often requires a different approach when compared to traditional engineering systems which often use oil-based lubricants and hard-surface coatings.

"This project has helped us to better understand these requirements and develop new tools to address this need."