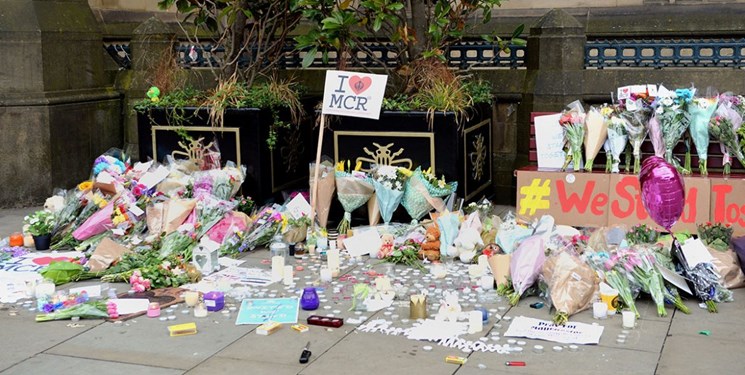 TEHRAN (FNA)- The older brother of the Manchester Arena bomber was known to the MI5, who found extremist material on his Facebook account two years before the attack that killed 22 people.

Ishmale Abedi, 27, was flagged by the MI5 in July 2015 when they searched his Facebook account and discovered a picture of Lieutenant Muath al-Kasasbeh, 26, a Jordanian air force pilot whose plane was shot down in Syria in 2014 by ISIS (also known as ISIL or Daesh) fighters, The Sunday Times reported.

The image showed Al-Kasasbeh shortly before he was burnt to death after being taken captive by ISIS, Ishmale captioned the image: "Looking for seasoned firewood".

Ishmale also shared an image of himself sitting with the son of Abu Anas al-Libi, a senior al-Qaeda figure - who was holding a handgun.

Ishmale was pictured holding a variety of weapons including a machine gun, rocket-propelled grenade launcher, and anti-aircraft gun. One photograph saw Ishmale dressed in camouflage with the ISIS flag burning behind him, The Sunday Times reports.

Two months later in September 3, 2015, Ishmale was detained by border officials at Heathrow when entering the UK on return from his honeymoon, his phone was seized and its contents downloaded.

On the phone authorities found ISIS recruitment videos as well as chants and literature encouraging suicide missions and the murder of "infadels", the Sunday Times reports.

Almost two years later his brother Salman Abedi, 22, detonated a rucksack bomb in a foyer area of the Manchester Arena, known as the City Rooms, at the end of an Ariana Grande concert, killing 22 people and injuring hundreds more on May 22, 2017.

The family moved to the UK fleeing Colonel Gaddafi's Libya, now Ishmale is the only remaining member of the family to live freely in Manchester.

He has so far refused to answer questions about his terrorist brothers who made the improvised bomb, Salman and Hashem, at the inquest into the attack.

He is expected to be compelled to give evidence in October and could face prison if he does not comply, The Sunday Times reports.

Ishmale denies any knowledge of his brothers' plans for the attack, or that he had any part of it.

His younger brother suicide bomber Salman, 22, died with the 22 people he murdered in the blast.

Ishmale's youngest brother Hashem, now 23, had originally pleaded not guilty to 22 counts of murder, attempted murder and plotting to cause an explosion likely to endanger life after being extradited to the UK from Libya.

He did not give evidence at the Old Bailey but provided a pre-prepared defence statement in which he denied involvement, claiming to have been "shocked" by what his brother had done and that he did not hold extremist views.

He went on to be convicted by a jury of all the offences and was handed 24 life sentences in August with a minimum term of 55 years before he can be considered for parole.

But on October 22, 2020 Hashem was interviewed in prison where he admitted he played "a full and knowing part", the inquiry was told.

Ishmale, who attended Didsbury mosque, was arrested in Manchester the day after the attack has been interviewed 22 times by Greater Manchester anti-terrorism police since the attack but has not been charged.

Months before the attack in April 2017 he purchased one-way tickets to Libya for Salam and Hashem - Salam returned to the UK five days before bombing Manchester arena, Hashem remained in Libya.

A former friend told The Sunday Times, "He had quite a dominant role in the family. He was the eldest brother and was supposed to look after Salman and Hashem when the parents were away in Libya. I think he had trouble controlling them. They wouldn't do what they were told."

Ishmale's DNA or fingerprints were found on a hammer in the Nissan Micra where materials for the homemade bomb had been kept but no TATP explosive was reported to have been found in Ishmale's home.

Police could not conclude whether Ishmale had been in the car as the hammer is a "moveable object", The Sunday Times reports.

The brother's parents, who had lived in Fallowfield, Manchester, and were living in Libya at the time of the attack, are also refusing to cooperate with the inquest.

His father Ramadan will face arrest if he returns to the UK as he is wanted for questioning by Greater Manchester police.

It is thought the brothers, Salam and Hashem, used their mother's HSBC bank account to fund the attack.

Ishmale was the principal controller of the account but claims he did not know of any transactions made by his brothers.