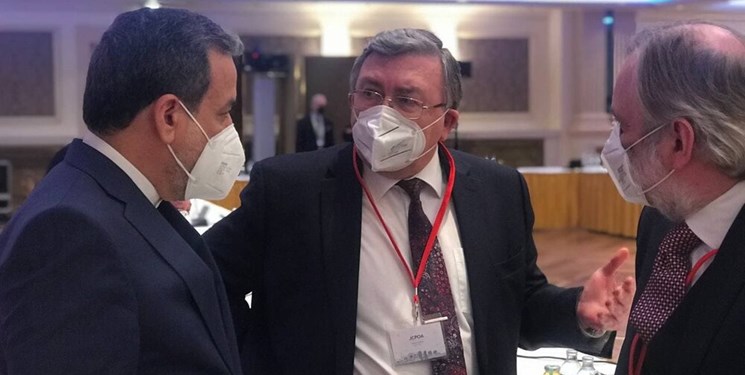 TEHRAN (FNA)- The heads of the Iranian and Russian delegations at the negotiations between Tehran and the G4+1 (Russia, China, France and UK plus Germany) underway in the Austrian capital reviewed the latest developments in the ongoing nuclear talks in Vienna.

Iran’s Deputy Foreign Minister Seyed Abbas Araqchi and Head of the Russian delegation Mikhail Ulyanov held a meeting on Saturday morning to review the latest issues on the Joint Comprehensive Plan of Action.

Araqchi and Ulyanov stressed the need to maintain close mutual cooperation on the nuclear talks.

The Russian diplomat reiterated its support for the nuclear deal and the need for the lifting of all US sanctions against Iran.

The next round of nuclear talks will be held in Grand Hotel in the Austrian capital of Vienna today between Iran and the G4+1.

In relevant remarks on Thursday, two informed Iranian sources said that the United States must first remove all sanctions before the Islamic Republic accepts results of the ongoing talks in Vienna.

Iranian officials would accept the outcomes of the ongoing Vienna talks on the revival of the Joint Comprehensive Plan of Action only when all sanctions illegally imposed on the country by the US are removed and Iran verifies their removal, the sources told Press TV on Thursday.

Based on the report, such US acts as CAATSA and ISA as well as visa and U-turn regulations and the so-called Section 311 of the USA Patriot Act are other major obstacles that prevent Iran from availing itself of the full benefits of the JCPOA.

The sources further said that other problems not allowing Iran to benefit from the JCPOA include non-removal of sanctions and temporary 120- and 180-day lifting of US bans.

The remarks by the Iranian sources came after the Associated Press quoted “current and former US officials and others familiar with the matter” as saying that the Biden administration is considering a near wholesale rollback of some of the most stringent sanctions imposed on Iran in a bid to get the Islamic Republic to return to compliance with the JCPOA.

Biden administration’s officials have denied they will remove all non-nuclear sanctions imposed on Iran.

“Any return to the JCPOA would require sanctions relief, but we are considering removing only those sanctions that are inconsistent with the JCPOA,” State Department spokesman Ned Price said.

“Even if we rejoin the JCPOA — which remains a hypothetical — we would retain and continue to implement sanctions on Iran for activities not covered by the JCPOA, including Iran’s missile proliferation, support for terrorism, and human rights abuses,” he added.