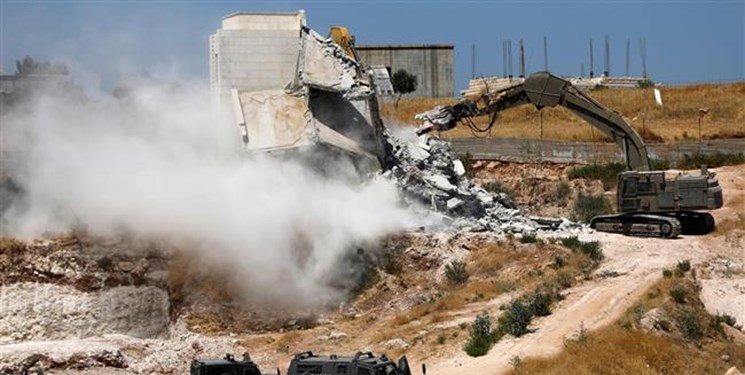 In a statement on Sunday, Fawzi Barhoum, a Hamas spokesman, held the Israeli regime responsible for harming the inhabitants of Sheikh Jarrah district of Jerusalem Al-Quds, where Palestinian homes and structures are being demolished for the construction of a new settlement outpost in the area, presstv reported .

“The mass displacement of our people in Sheikh Jarrah neighborhood and the seizure of their homes is an obvious targeting of the Palestinian identity of Jerusalem and the Palestinian presence in the city,” Barhoum said.

The remarks came after a court ruled that at least six Palestinian families must vacate their homes in the area by Thursday, despite having lived there for generations.

The same court also ruled that seven other Palestinian families face eviction from their homes by August 1. That is a total of 58 people including 17 children.

Barhoum argued that normalization deals between Israel and several Arab states have encouraged the Tel Aviv regime to expand its occupation of Palestinian territories and escalate construction of housing units, mainly in East Jerusalem Al-Quds and surrounding neighborhoods.

He added that a national resistance strategy should be adopted in order to confront the Israeli aggression.

The Hamas spokesman further urged Palestinians to intensify their presence in the streets of Sheikh Jarrah neighborhood to prevent the implementation of “Zionist schemes”.

Barhoum also called on the Arab League, the Organization of Islamic Cooperation (OIC), as well as the broader Muslim world to assume their responsibilities in protecting Palestinians and supporting their resistance.

Meanwhile, Palestinian Minister of Jerusalem Al-Quds Affairs Fadi al-Hadami has called on the international community to promptly intervene and take immediate action in order to halt Israel’s expulsion of Palestinians from their homes in Sheikh Jarrah.

He also denounced the ongoing home demolitions in Sheikh Jarrah as a crime and a violation of all international laws, stressing that Israel is carrying out “ethnic cleansing” against the residents of the area in favor of Israeli settlers.

He further highlighted the fact that the Israeli regime disregards international law and insists on facilitating settlement plans which aim at the ethnic cleansing of Palestinians to replace them with settlers.

Also on Sunday, the West Bank-based Fatah party called on the United Nations (UN) and the UN Security Council (UNSC) to fulfill their legal responsibilities and act against Israel's imminent plan to displace hundreds of Palestinians from their homes, lands and properties in Sheikh Jarrah.

“The people of Jerusalem are subjected to the massacre of ethnic cleansing, racial discrimination and persecution at the hands of the extremist Netanyahu government in the face of the world's silence and its official institutions," said Fatah Spokesman Osama Al-Qawasmi.

“Our proud and heroic people in Jerusalem are facing the worst practices of injustice and the policy of displacement, exile, destruction of homes and arrest,” he said, adding, “The world must act immediately to stop this Israeli aggression immediately.”

Israeli authorities usually demolish Palestinian homes in the occupied territories, claiming that the structures have been built without permits, which are nearly impossible to obtain.

They also sometimes order Palestinian owners to demolish their own homes or pay the demolition costs to the municipality if they do not.

The latest surge in demolition has drawn widespread condemnation against the Israeli regime for exploiting the coronavirus crisis to press ahead with its campaign of razing Palestinian homes.

More than 600,000 Israelis live in over 230 settlements built since the 1967 Israeli occupation of the West Bank and East Jerusalem Al-Quds.

After former US President Donald Trump took office in December 2016, Israel stepped up its settlement expansion in defiance of UN Security Council Resolution 2334, which pronounces settlements in the West Bank and East Jerusalem Al-Quds “a flagrant violation under international law.”

All Israeli settlements are illegal under international law as they are built on occupied land.

The UN Security Council has condemned Israel’s settlement activities in the occupied territories in several resolutions.

Palestinians want the West Bank as part of a future independent Palestinian state with East Jerusalem Al-Quds as its capital.