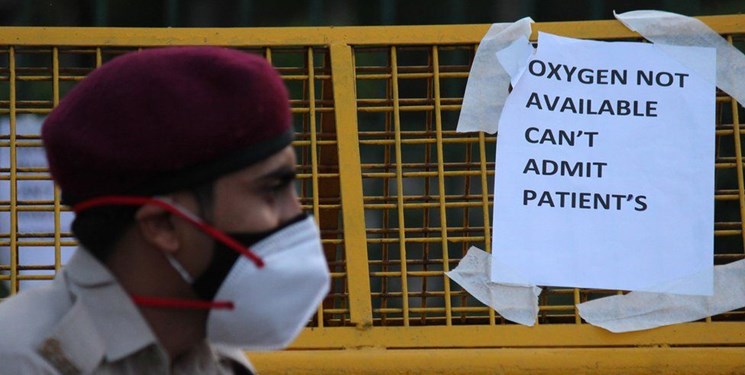 TEHRAN (FNA)- A severe shortage of medical oxygen in New Delhi, the center of power in India, left dozens gasping for their final breaths in their hospital beds, a sign of government futility in its fight against a crushing COVID wave.

On Sunday, the New Delhi High Court said that it would start punishing government officials for failing to deliver oxygen after hospitals in the capital successfully sought an injunction, The Associated Press reported.

It was the latest verdict against Indian leaders, after voters in crucial state elections dealt Prime Minister Narendra Modi’s party a blow by electing an opposition party in West Bengal, one of India’s most populous states and a stronghold of opposition to Modi, India’s most powerful prime minister in decades.

The Supreme Court also weighed in on Sunday, urging the central and state governments to consider another lockdown to gain control of the virus and to create an emergency stockpile of oxygen, according to Indian news media.

Critics have blasted Modi’s handling of the crisis. A sudden, harsh lockdown imposed early in the pandemic sent millions of laborers scrambling back to their home villages and disrupted the economy. When cases dropped, Modi’s government failed to heed warnings of a potential resurgence from scientists, and its own COVID-19 task force did not meet for months. Modi himself declared a premature victory over COVID in late January, during what proved to be a mere lull in infections.

Now, cremation grounds are working day and night, burning thousands of bodies. The country is rife with the more lethal and more transmissible B.1.1.7 variant of the coronavirus first found in Britain, as well as a homegrown variant, B.1.617. Experts are worried that the unchecked outbreak will spawn more dangerous variants of the coronavirus.

On Saturday, India reported nearly 3,700 deaths, its highest daily toll. Over the weekend, the country logged 401,993 new cases and then 392,488, tallies that no other country has ever seen. And experts say the real toll is far higher.

Modi was scheduled to meet with his health minister on Sunday to discuss the oxygen shortage and concerns that doctors and nurses are overwhelmed. Indian officials announced over the weekend that the army had opened its hospitals to civilians and that the first batch of the Russian vaccine, Sputnik V, had arrived, a boost to India’s flagging inoculation campaign.

Over the weekend, aid from a half-dozen countries touched down at airports across India; they included 157 ventilators from the United Arab Emirates, 500 oxygen cylinders from Taiwan and 1,000 vials of the medicine Remdesivir from Belgium.

On Sunday, the United States delivered the third of six aid shipments to New Delhi, including 1,000 oxygen cylinders; Britain donated more than 400 oxygen concentrators; and France sent eight oxygen generators, each of which can serve 250 hospitalized patients.

Britain and France announced plans to donate more, while the United States has pledged $100 million worth of supplies, which will include 15 million N95 masks and one million rapid diagnostic tests. Ron Klain, the White House chief of staff, said on Sunday that the Biden administration had sent the raw materials to produce 20 million vaccine doses, and he said the United States may lift patents on vaccines to boost global production.

Vaccines are badly needed in India, where shortages forced several states on Saturday to delay expanding access to everyone aged 18 and over. While it is a global power in vaccine production, India didn’t purchase enough doses to protect itself: Less than 2 percent of its 940 million adults have been fully vaccinated.