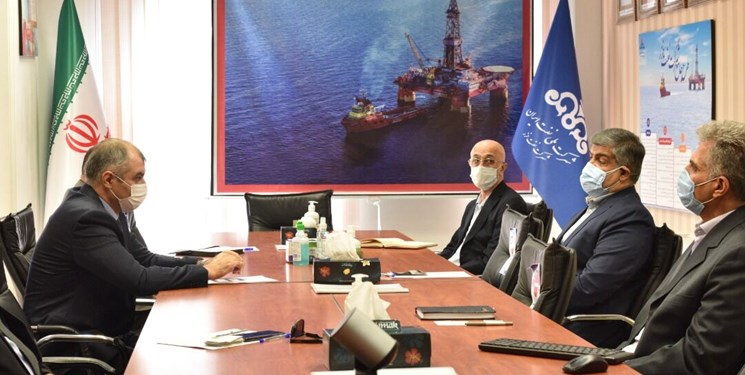 TEHRAN (FNA)- Senior Iranian and Turkmen officials in a meeting in Tehran underlined the need to expand mutual cooperation between the two countries, specially in the energy and oil sector.

During the meeting in the Iranian capital on Monday, Managing Director of the Caspian Oil Company Ali Osouli and Turkmenistan's Ambassador in Tehran explored avenues for bolstering and reinvigorating bilateral relations.

During the meeting, Osouli outlined the activities and missions of the Caspian Oil Company, and said that Iran and Turkmenistan have age-old relations with deep ethnic ties, as well as common land and sea borders.

He underlined the capabilities and achievements gained in the deep waters of the Caspian Sea.

Osouli stated that the formation of the South Caspian Study Consortium, compartmentalization and prioritization of structures and prioritization of exploration drilling operations in blocs 6.2 and 8.1 and the oil cooperation agreement with the Republic of Azerbaijan in the Alborz bloc were part of the important actions and measures taken by the Caspian Oil Company.

Turkmen Ambassador to Iran Ahmed Gurbanov, for his part, spoke about the golden age of relations between the two countries and stressed the need for cooperation in the field of oil and gas projects.

He also welcomed the expansion of cooperation, especially in the technical and engineering sectors, and noted the role of the embassy as a bridge of communication based on providing logical and executive proposals to companies operating in Turkmenistan.

In relevant remarks in June 2020, Iranian Minister of Road and Urban Development Mohammad Eslami underlined that reliability and mutual commitments have played a key role in reopening of Iran-Turkmenistan shared border.

"With the implementation of hygienic rules, commitment, and regulations during coronavirus pandemic, some of the borders were reopened," Eslami said.

He said that Iran has reopened its borders with Turkey, Pakistan, and Turkmenistan, and trading activities have been resumed.

"In the upcoming days, road transits will also be resumed," Eslami pointed out.

He reiterated that reliability has been the main reason for Iran-Turkmenistan border reopening.