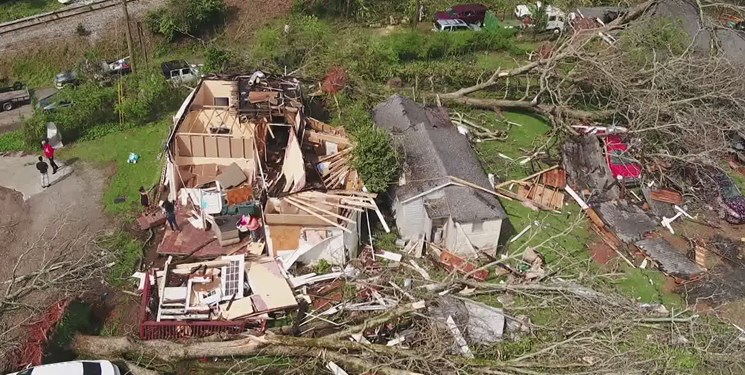 TEHRAN (FNA)- Severe weather — including a possible tornado in the Atlanta area — continued to roar across the storm-battered US South on Monday, a day after multiple twisters were reported in Mississippi.

In all, more than 100 million people from New Mexico to Delaware were at risk of some form of severe weather Monday afternoon and evening, the Storm Prediction Center said, USA Today reported.

More severe storms were expected across the Southeast on Tuesday, forecasters warned. States at greatest risk included much of Louisiana, Mississippi, Alabama and Tennessee, the Prediction Center said.

At least 37,000 people were without power Monday evening in Texas, Georgia and Florida, according to poweroutage.us.

Storm hazards Tuesday will include hail, flooding downpours, tornadoes and damaging, straight-line wind gusts of up to 75 mph, according to AccuWeather.

Monday morning, a tornado warning had been issued for portions of the Atlanta metro area, but it expired after the storm moved through the region.

One man was killed Monday in Douglasville, Georgia, when a falling tree brought power lines down onto his vehicle. There were reports of trees down across the Atlanta area, firefighters said.

A tornado watch remained in effect Monday afternoon for portions of Alabama and Georgia along with parts of both South and North Carolina.

“Severe thunderstorms, including isolated tornadoes, can occur in the swath from central Alabama through central and Northern Georgia, middle and upstate South Carolina and part of North Carolina into Monday evening,” AccuWeather meteorologist Alex Sosnowski said.

A separate tornado watch was also in effect across Texas and Oklahoma late Monday evening.

A tornado warning had been issued for parts of the Charlotte, North Carolina, metro area Monday afternoon, but it expired after the storm threat passed, the National Weather Service said.

In the Southern Kentucky town of Tompkinsville, a severe storm Monday morning damaged an estimated 30 homes and knocked down trees and power lines.

The weather service also said that ongoing severe thunderstorms and heavy rains may bring damaging gusts, large hail, a few tornadoes and flash flooding across parts of the Southern Plains into the middle Mississippi and lower Ohio Valleys throughout the day and evening on Monday.

Larger metro areas such as Little Rock, Arkansas; St. Louis and Indianapolis could be in the crosshairs of these dangerous thunderstorms, AccuWeather said.