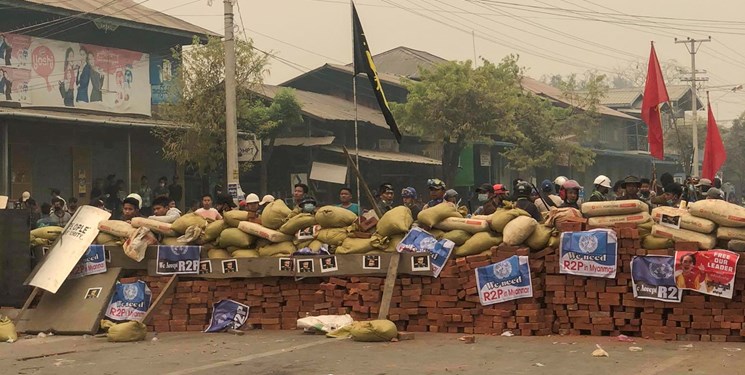 TEHRAN (FNA)- Myanmar's anti-coup government said it has formed a "people's defense force" to protect people from military attacks and violence directed by the junta, taking the country one step closer to civil war.

The so-called National Government, set up last month by an array of groups opposed to the military junta, said the defense force was formed as a precursor to a Federal Union Army, presstv reported.

It said the force was responsible to "make effective reforms in the security sector in order to terminate the 70-year-long civil war," and to deal with "the military attacks and violence from [the] state administration council on the people."

The military junta has been ruling the country for the last three months, since ousting the civil government of Aung San Suu Kyi in a coup on February 1.

Defying the junta, people have been protesting on the streets, calling for the release of the deposed leader and other politicians and the restoration of the civil government.

Thousands have so far been arrested under the junta, including 3,677 people who have been sentenced or are in detention, according to the Assistance Association for Political Prisoners (AAPP) advocacy group.

The AAPP says that 769 people have also been killed by the military.

The United Nations (UN)'s special envoy on Myanmar warned on Friday that violence was worsening in the country.

Meanwhile, the military junta has accused people of destabilizing the country with a series of bombings over the past week.

On Wednesday, the junta controlled-media said five people had been killed in a bomb explosion in the country. It claimed that the incident occurred when the victims, including an ousted lawmaker, were building a bomb.

The junta also announced a ban on satellite television receivers, citing security threats from outside broadcasters. It said that anyone caught violating the ban risked being imprisoned.

The military had already restricted access to mobile internet to contain the protests across the country.

Analysts say the bans are increasingly pushing Myanmar back to a state of isolation.

The Southeast Asian country was ruled by the military for most of the past six decades.