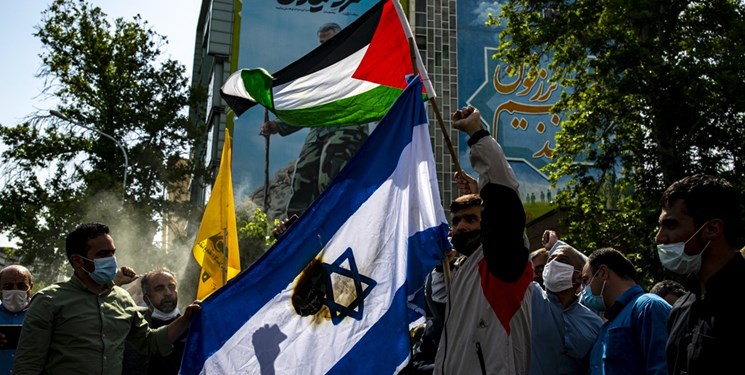 TEHRAN (FNA)- People in several countries marked the International Quds Day to condemn Israeli atrocities against Palestinians in the occupied territories as well as the besieged Gaza Strip.

Due to the coronavirus pandemic, the annual nationwide rallies marking the International Quds Day were staged by processions of cars, motorcycles and bicycles in Iranian capital and other cities across the country on Friday morning to voice solidarity with Palestinian people.

Carrying photos of Supreme Leader Ayatollah Seyed Ali Khamenei and Lieutenant General Qassem Soleimani, crowds of people have been gathering at squares in Tehran, chanting slogans against the US and Israel and burning their flags.

At Tehran’s Felestin (Palestine) Square, demonstrators shouted slogans “Down with the US” and “Down with Israel”, raising Palestinian flags.

Wearing face masks, Iranians from all walks of life also gathered at other squares in Tehran, including Azadi, Enqelab, Ferdowsi, and Imam Hossein (AS).

Similar gatherings were also held in other cities across the country, including Mashhad, Ahvaz, Kerman and Isfahan.

Iraqis also marked the international day, stressing available evidence shows that the Zionist regime of Israel is in decline.

In a gathering on Thursday evening attended by 70 prominent Iraqi figures, the Spokesman of Iraq's anti-terror Kata'ib Hezbollah group said the most important development with regard to Palestine in the last 40 years has been the victory of the Islamic Revolution in Iran.

Mohammed Mohi added the victory of the Islamic Revolution of Iran changed the nature of the advocates of Palestine from leftist and tribal Arab groups toward Islamist groups.

The Spokesman of another Iraqi anti-terror movement, Asa'ib Ahl Al-Haq, stated the issue of Palestine should not be limited to the International Quds Day, noting that it needs more attention throughout the year.

The new generation needs to know the atrocities committed by the Zionist regime in the past and in the current era, Mohammed Al-Rabie continued.

He also recalled his meeting with the Head of the Political Bureau of Hamas Ismail Haniyeh, during which he was told that if it was not for the efforts made by Gen. Soleimani, there would have been “no Gaza Strip, Ramallah, Quds and Palestine”.

Al-Nujaba resistance movement also announced that Israel has been isolated for the first time in history as weapons of resistance groups continue to target the regime with the aim of liberating Al-Quds.

In a statement, Al-Nujaba commemorated Imam Khomeini, saying, “Our faith in God’s promise and his aid is not shaken and we see it closer to ourselves than any other day.”

The group highlighted the miscalculations of Israel's supporters on the war front, which it stated forced them to negotiate with the Islamic Resistance Axis.

“These days, for the first time in our history, we see the Zionist regime in a defensive position, which is the result of successive defeats against the forces of the Islamic Resistance in occupied Lebanon and Palestine,” it added.

It called Gen. Soleimani a “martyr of Al-Quds”, voicing confidence that the present generation will see the promise of victory fulfilled in the near future.

Head of Hamas Islamic Resistance Movement Haniyeh in a message on the occasion of the World Quds Day wrote that adopting a comprehensive strategy for taking back the occupied holy Quds and also encountering the threats posed against the Palestinian nation is a dire necessity today.

Leader of Palestinian Islamic Jihad, Ziyad Al-Nakhalah, underlined the need to continue the fight against the Israeli regime, saying Al-Quds city is stronger than ever due to the resistance of its residents.

Abu Hamza, a Spokesman for the Al-Quds Brigades, the military wing of the Islamic Jihad in Palestine, warned that if the Tel Aviv regime continues its aggression, the Ramadan intifada will reach Zionist settlements.

Head of the Popular Front for the Liberation of Palestine Ahmad Sa'adat stressed that Quds Day should be upheld by the people of the world.

Sa'adat called for fighting against the occupation of the Israeli regime, saying Israel is nearing its collapse.

A member of the Palestinian resistance movement Hamas stated Palestinian people are united in the fight against the Zionist regime.

Suhail Al-Hindi noted the fight over Al-Quds is still ongoing, adding that the enemy has targeted the existence of Palestine.

The International Quds Day is an annual event opposing Israel's occupation of Beitul-Muqaddas. Anti-Zionist rallies and demonstrations are held on the last Friday of Ramadan in Muslim and Arab countries around the world, specially in Iran, as well as a large number of non-Muslim states. The International Quds Day was started by the late Founder of the Islamic Republic, Imam Khomeini, in 1979 as a way of expressing solidarity with the Palestinians and underscoring importance of the holy Quds to Muslims.