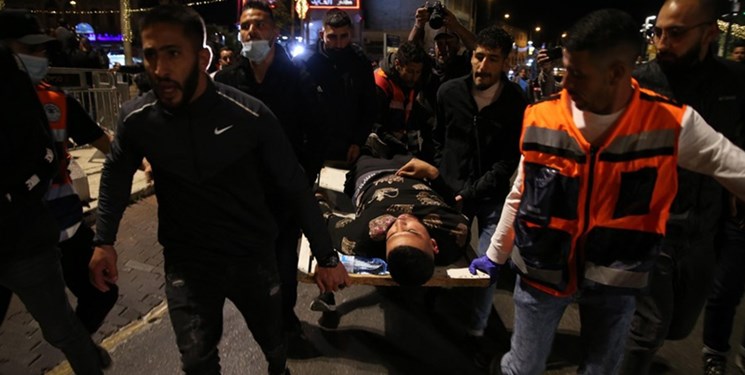 TEHRAN (FNA)- Several world countries rapped Israel for escalation of tensions and brutal injury of hundreds of Palestinians in Jerusalem as the resistance leaders warned Tel Aviv of a crushing response.

At least 205 Palestinians were wounded Friday as clashes erupted at Jerusalem's Al-Aqsa Mosque compound, in a serious escalation in tensions that have been building up in Jerusalem over the past weeks.

The Palestinian Red Crescent emergency service said some 205 people were wounded in clashes with Israeli police there and elsewhere in Jerusalem, including 88 who were hospitalized. The Palestinian Red Crescent has also set up a field hospital on the Mosque's compound due to the large number of wounded protesters, most of them wounded in the face and eyes by rubber-coated bullets and shrapnel from stun grenades.

Some 70,000 worshippers attended the final Friday prayers of Ramadan at Al-Aqsa, the Islamic endowment that oversees the site said. Thousands protested afterwards, waving the green flags of the Islamic resistant group, Hamas, and chanting pro-Hamas slogans before dispersing peacefully.

“We tell Netanyahu: don’t play with fire. This is a battle that you cannot win. Israeli arrogance and tyranny will be smashed on the stones of the Al-Aqsa Mosque,” Haniyeh said.

“The enemy is acting foolishly in Jerusalem, and they don’t realize what the results will be,” he added.

Ziyad al-Nakhalah, Secretary General of the Islamic Jihad movement, also warned Israel, and said that it "should expect a response any moment now."

“What’s happening in Jerusalem tonight cannot pass idly by. The enemy can expect our response at any moment,” he said.

Joint List Lawmaker Sami Abu Shehadeh, who arrived at Temple Mount for Saturday's morning prayer, said that Netanyahu is responsible for the recent flare-up. "The Al-Aqsa Mosque is a red line that even Netanyahu cannot cross," he added.

Palestinian Authority President Mahmoud Abbas said in a televised statement that the Israeli government is fully responsible for the recent incidents in Jerusalem, as well as any repercussions that result from the continuing escalation.

He also voiced “full support for our heroes in Aqsa”.

He underlined that the “brutality and terrorism” of the Israeli settlers in East Jerusalem would only make Palestinians more attached to their national right.

Hamas's political chief Khaled Mashaal said that the incidents in al-Aqsa mosque will be a driving force for the Islamic Ummah to act against Israel, adding, “We will respond the Israeli aggressions whenever we want and we do not take permission from anyone.”

Mahmoud al-Zahhar, another member of the Hamas political bureau, condemned Arab leaders for remaining “silent as they watch the attack on Al-Aqsa Mosque”.

He said the only solution to the situation in Jerusalem would be through “armed resistance”.

"Iran strongly condemns the attack by the occupying regime of Al-Quds on Al-Aqsa Mosque, the first qibla of Muslims, and the killing and wounding of Palestinian worshipers on the International Quds Day," Foreign Ministry Spokesman Saeed Khatibzadeh stated on Saturday.

He noted that this war crime once again proved to the world the criminal nature of the illegitimate Zionist regime and the need for urgent international action to stop the violation of the most fundamental principles of international humanitarian law.

"The Islamic Republic of Iran condemns this heinous crime against humanity and extends its condolences to the families of the martyrs of the incident and calls on the United Nations and other international organizations to fulfill their definite duty in dealing with this war crime," he added.

The Islamic Republic of Iran proudly stands by the heroic people of Palestine and calls on all countries of the world, especially Islamic countries, to fulfill their historical duty and stand by the Palestinian people against the Zionist aggressors, Khatibzadeh stressed.

“Strongly condemning the attack this evening on al-Aqsa Mosque, our first Qibla. It is inhumane for Israel to target innocents praying during Holy Ramadan,” Foreign Minister Mevlut Cavusoglu said on Twitter, referring to the Muslim holy month.

“Will always stand by the just cause of the people of #Palestine,” Cavusoglu added, wishing a speedy recovery to those injured in the Israeli raid.

Qatar, a key patron of Gaza’s Hamas rulers, also condemned the “invasion” by Israeli forces in the Al-Aqsa Mosque area.

“This is a provocation to the feelings of millions of Muslims around the world,” the Qatari Foreign Ministry said in a statement.

Hamas in a statement stressed that the battle in the occupied East Jerusalem al-Quds is ongoing, urging the resistance forces in the Gaza Strip to mobilize to confront the Israeli acts of aggression.

"The battle is still going on and we call on our resistance [brothers] in the Gaza Strip to sound the alarm," Hamas said in a statement on Friday.

It referred to the acts of aggression committed by Israeli forces and settlers against Palestinians in Jerusalem al-Quds and a planned raid on al-Aqsa Mosque, the third holiest site in Islam, scheduled for Monday.

Hamas reiterated its support for the Palestinians who have been confronting the Israeli violations at the Damascus Gate, one of the main entrances to the Old City of Jerusalem al-Quds, and in the Sheikh Jarrah neighborhood.

Tensions have escalated in Sheikh Jarrah in recent days amid Israeli court rulings that order a number of Palestinian families to evacuate their homes there.

The group also called on Palestinian people everywhere, specially in the occupied West Bank and areas occupied by Israel since 1948, to stage a sit-in at al-Aqsa on the last nights of Ramadan until Eid al-Fitr, which marks the end of the holy fasting month of Ramadan next week.

It also urged the Islamic and Arab nations to mobilize all their capabilities to liberate the holy city.

The spokesman for the United Nations High Commissioner for Human Rights said the evictions, "if ordered and implemented, would violate Israel's obligations under international law" on East Jerusalem territory it captured and occupied in the 1967 Middle East war.

"We call on Israel to immediately halt all forced evictions, including those in Sheikh Jarrah, and to cease any activity that would further contribute to a coercive environment and lead to a risk of forcible transfer," spokesman Rupert Colville said on Friday.

The European Union, Kuwait and Jordan have expressed alarm at the potential evictions.

Jordanian Foreign Minister Ayman Safadi said Jordan had given the Palestinian Authority documents that he said showed the Sheikh Jarrah Palestinians were the "legitimate owners" of their homes.

Israel's "provocative steps in occupied Jerusalem and violation of Palestinian rights, including the rights of the people of Sheikh Jarrah in their homes, is playing with fire," Safadi said in a foreign ministry statement on Twitter.

On Tuesday, the military wing of Hamas said Israel would "pay a heavy price" if it did not stop the aggression against Palestinians in Sheikh Jarrah.

Mohammed Deif, chief of staff and commander of the Izz ad-Din al-Qassam Brigades, issued a rare and strongly-worded statement to deliver a "final" warning to the Israeli regime.

Israel occupied East Jerusalem al-Quds, the West Bank, and the Gaza Strip during the Six Day War in 1967. It later had to withdraw from Gaza but placed the enclave under siege.