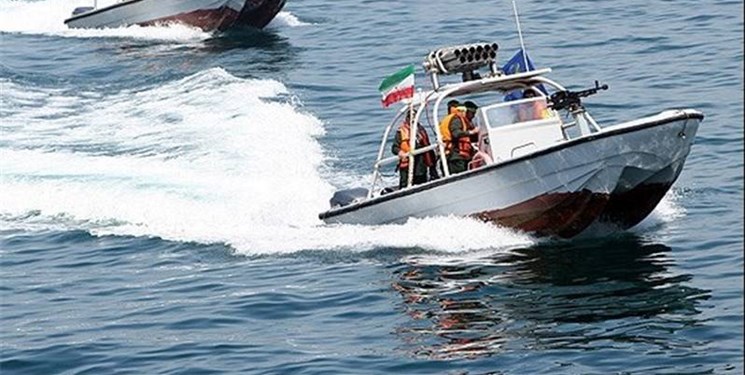 TEHRAN (FNA)- The Islamic Revolution Guards Corps Navy in a statement on Tuesday dismissed recent claims by Pentagon press secretary John Kirby that the IRGC speedboats approached the US warships in the Persian Gulf, and cautioned the US navy to show professional codes of conduct.

“The terrorist US Army’s naval fleet in the Persian Gulf continues unprofessional conducts, specially this month, and it has always posed a serious threat to the security of the region. On May 10, the IRGC naval patrol vessels during the routine and normal daily missions in the territorial waters of the Islamic Republic of Iran encountered 7 American vessels in the Strait of Hormuz, which showed unprofessional behaviors, including flying helicopters, and firing flares and aimless and provocative shots. The IRGC vessels, while observing the legal distance enshrined in maritime guidelines and regulations, warned against their risky and unprofessional behavior and they (the Americans) continued their path after correcting their conduct,” the statement said.

It referred to the remarks by Kirby that the IRGC vessels approached the US warships, and said the Pentagon press secretary is raising an incorrect and unreal claim in a bid to make the public opinion believe that the US navy is acting responsibly to prevent any danger and miscalculation.

“This is while it is the Americans who have become the center of instability, threat and dangerous insecurities in the region, including in the Strait of Hormuz and the Persian Gulf, with their illegitimate presence,” the statement underlined.

It warned that “the Americans should strictly abide by international regulations and the rules of navigation and bandit control in the strategic Strait of Hormuz and the Persian Gulf by refraining from false narratives and unprofessional behavior".

The statement underlined that “the powerful and courageous defenders of the Strait of Hormuz and the Persian Gulf (the IRGC forces) consider the illegal, unprofessional and dangerous behavior of foreigners, specially the terrorist US Army’s navy fleet, which poses a threat to the maritime security of this sensitive region, as a violation of its redline", adding that the IRGC Navy confidently and calmly pursue their missions in the Strait of Hormuz and the Persian Gulf, but "are ready to give a crushing and courageous response to any miscalculation”.

The statement came in response to recent remarks by Kirby who had claimed that 13 Iranian vessels maneuvered at high speed toward six US Navy ships that were escorting the guided missile submarine USS Georgia through the Strait on Monday. The six Navy escort ships included the guided missile cruiser USS Monterey.

Late last month, IRGC Navy Commander Rear Admiral Alireza Tangsiri said that the IRGC and the Army monitor any move of the enemy in the Persian Gulf.

"Today, every ship that enters the Persian Gulf, according to the law on band control in the Strait of Hormuz, is monitored and has to introduce itself," Rear Admiral Tangsiri said.

"The Islamic Republic’s presence in this region is not only in the military field, but also a strategic presence in different economic, political and even cultural sectors in the national and international arenas," he added.

"The Persian Gulf is the engine of economic development and growth of Asian and European countries and the important and strategic axis of the sea, air and commercial transportation between different countries," the commander noted.

"These strategic and geopolitical positions of the Persian Gulf have led to the illegitimate presence of some Western powers and foreign countries in this region," Tangsiri highlighted.