Hamas Tells Israel Resistance Group is Ready for 'Every Scenario' 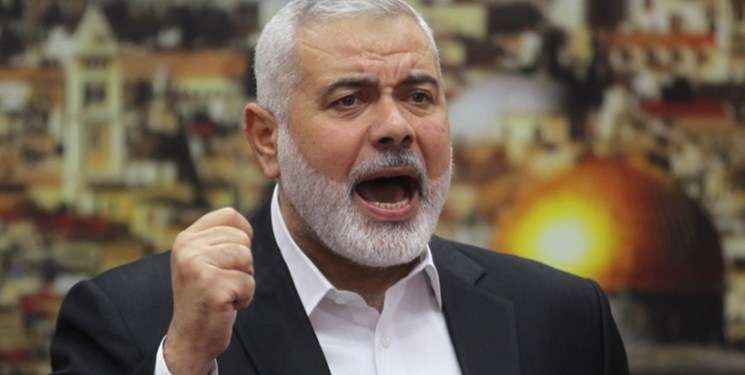 TEHRAN (FNA)- Head of the political bureau of the Palestinian resistance movement Hamas Ismail Haniyeh warned Israel against escalating tensions in the besieged Gaza strip, saying the resistance front is ready for any scenario and remains steadfast in fighting crimes by the occupying regime.

Haniyeh stated in a televised speech late on Tuesday that the movement has taken a firm decision not to stop resistance as long as the Israeli regime continues its crimes and violations in the occupied Jerusalem Al-Quds and at the Al-Aqsa Mosque, presstv reported.

“We have the right to respond to the Israeli offensive and protect the interests of our people as long as the Israeli occupation continues the escalation,” Haniyeh added.

The top Hamas official hailed as “victory” and a new “balance of power” the massive rocket fusillade on Israel, including an unprecedented 130 rockets fired at Tel Aviv and its suburban areas earlier in the day, and stressed the Palestinian resistance movement would not leave Jerusalem Al-Quds alone.

“We have achieved victory in the battle for Jerusalem, the defense of Jerusalem,” Haniyeh said, adding, “Hamas is ready for every scenario, whether escalation or ceasefire… We, as Palestinians, will not abandon Jerusalem and the resistance, holding the occupation fully responsible for the escalation.”

"In the specific, there have been urgent calls since yesterday and until now with the brothers in Egypt, Qatar also with the United Nations. We said to everyone that who had ignited fire in Jerusalem and Al-Aqsa and the flames extended to Gaza is the Israeli occupation, therefore, it is responsible for the consequences," he added.

Haniyeh said the “links between Gaza and Jerusalem Al-Quds are unchangeable", underlining that the holy city has drawn up a new “scale of power” at the political level.

“We reiterate that we will not backtrack on the equation of a 'bombing for a bombing' that the Palestinian resistance is trying to impose on the Israeli occupation,” Haniyeh underscored.

During his televised address, the head of the political bureau of Hamas highlighted the unity of Palestinians in their fight against Israeli occupation and said that Hamas had so far acted on three fronts.

“The first is the Al-Quds front, the second is the Gaza front... and the third are the Palestinians in the lands occupied in 1948,” he added.

Haniyeh also stated that the resistance movement would remain the armored shield of the Palestinian people and would continue to fend off the Israeli aggression at any cost.

The top Hamas official made the remarks after the Palestinian resistance movement fired scores of rockets toward the occupied territories, hitting Tel Aviv and the surrounding areas in retaliation for the regime’s aggression against the Gaza Strip.

The retaliatory strikes came shortly after a 13-storey residential block in the Gaza Strip was hit by an Israeli air raid, with Hamas and the Islamic Jihad resistance group saying they would respond by firing rockets at Tel Aviv.

Israeli airstrikes on various locations in the Gaza Strip had claimed the lives of at least 35 people, including children and women, and left more than 250 others injured.

Tensions have escalated in Jerusalem Al-Quds, the occupied West Bank and Gaza throughout the Muslim holy month of Ramadan, amid the planned forced expulsions of dozens of Palestinians from the Sheikh Jarrah neighborhood, where illegal Israeli settlers are looking to take over the properties of Palestinian families.

The violent crackdown by Israeli forces against Palestinians in the city have already sparked global concern that the unrest could spread further.

Israel occupied East Jerusalem Al-Quds, the West Bank, and the Gaza Strip during the Six-Day War in 1967. It later had to withdraw from Gaza, but has been occupying the other territories ever since.

Another Hamas official, Maher Salah, said on Tuesday that the Palestinian people in the Gaza Strip and the occupied West would respond to the Israeli attacks if they continued, stressing that the resistance movement's response is to stop Israeli violations and to halt the implementation of the regime's aggressive schemes in Jerusalem Al-Quds.

“The resistance has forced the Israeli occupation to retreat,” Salah stated, adding that the Israeli “aggression will open the gates of hell to everyone and transfer the conflict to unprecedented levels”.

The Hamas official underlined that any aggression against Jerusalem Al-Quds is a direct assault on every Palestinian and stated, “Such aggression will be met by a fierce response.”

Salah praised the steadfastness of Palestinians in defending the holy city and noted their battle against the Israeli occupation throughout the fasting month of Ramadan was “heroic”.