Supporters of Palestinians Hold Protests in US, UK 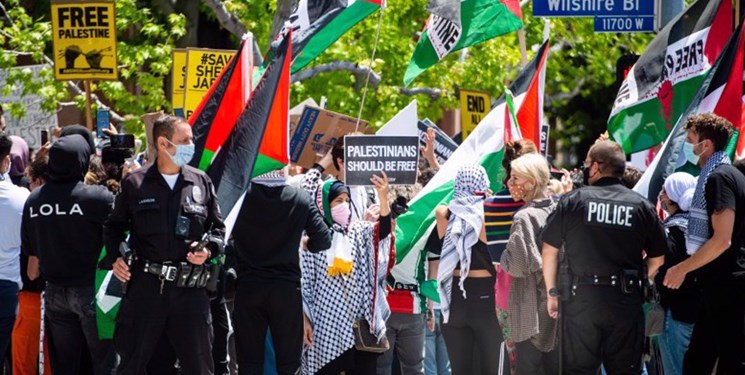 TEHRAN (FNA)- Thousands of people staged rallies in the US and UK to condemn Israel’s brutal acts in the occupied territories amid a surge in the Tel Aviv regime’s aggression against Palestinians.

On Tuesday, more than 100 demonstrators gathered for a pro-Palestinian rally outside Israel’s consulate in Los Angeles.

This comes as tensions have escalated in Jerusalem Al-Quds, the occupied West Bank and Gaza throughout the Muslim holy month of Ramadan, amidst the planned forced expulsions of dozens of Palestinians from the Sheikh Jarrah neighborhood, where illegal Israeli settlers are looking to take over the properties of Palestinian families.

“You can see Israeli aggression especially in Northern Jerusalem and Gaza,” said Sami Wassef, who attended the protest, adding, “Houses are being confiscated and families thrown out.”

The protest, titled “rally to save Palestine”, began near the Israeli consulate. The demonstrators then marched toward Times Square, shutting down 42nd Street.

They chanted slogans such as “Defend Jerusalem”, “Gaza under attack”, “No more money for Israeli crimes”, “Free Palestine” and “End the occupation now”.

The demonstration was organized by Muslim advocacy groups including, the Council on American-Islamic Relations (CAIR) and American Muslims for Palestine.

In a statement, CAIR said in the goal of the protest was to "call on the [Joe] Biden administration to condemn and oppose” Israel’s campaign “to expel Palestinian families from Jerusalem's Sheikh Jarrah neighborhood".

Additional protests are expected across the US on Wednesday.

People also staged a rally in the British capital London calling on their government to stop its support for the Israeli crimes against Palestinians.

In the wake of the Israeli regime's attacks in Jerusalem (Al-Quds), pro-Palestinian demonstrators took over Downing Street In the British Capital London.

The demonstrators even managed to clear out a small group of pro-Zionist demonstrators and chanted in solidarity with the Palestinians uprising against the occupation, sending a strong message of international solidarity.

Demonstrators also expressed their outrage over Britain's allowing for the production of weapons to be used by the Israeli military and the UK's historic support for Israel.

With the Gaza Strip under bombardment as the armed resistance fires rockets at Israel, the Palestinian people rise up throughout the occupied territories, whilst international solidarity seems now stronger than ever.

Israeli airstrikes on various locations in the Gaza Strip have claimed the lives of at least 48 people, including children and women, and left more than 300 others injured.