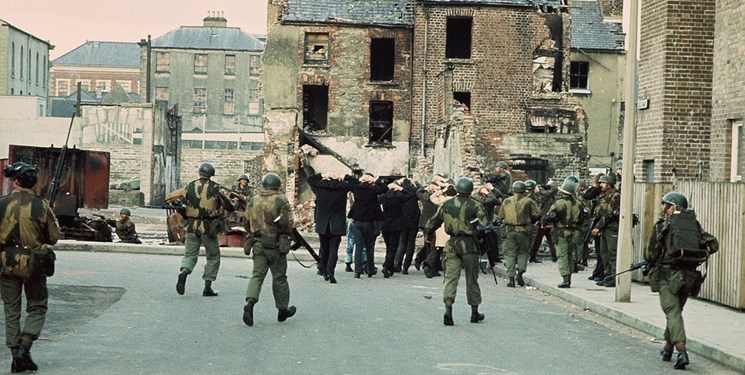 TEHRAN (FNA)- A judge-led inquiry found that UK soldiers shot dead nine “entirely innocent” Northern Irish people, including a priest and mother, during a 1971 incident in the ‘Troubles’ that sparked a surge in violence.

The inquest, looking into the deaths of 10 victims, was launched in November 2018 and led by Justice Siobhan Keegan, hearing from more than 100 witnesses to report on one of the most controversial incidents of Northern Ireland’s Troubles, RT reported.

The incident, known as the Ballymurphy massacre, resulted in the shooting of 10 individuals on the streets of a Belfast neighbourhood between August 9 and 11, 1971. Among those killed was a 38-year-old priest who was helping an injured man when he was shot, and a mother of eight. The woman, a Catholic who had only recently served British soldiers tea in her home, was trying to assist a fatally wounded teenager when she was shot.

Justice Keegan stated that, despite finding that nine of the victims were killed due to the use of unjustifiable or disproportionate force, there wasn’t enough evidence to say that the military was responsible for the death of one of the individuals, John James McKeer, who was shot while travelling to work.

“All of the deceased were entirely innocent of any wrongdoing on the day in question,” Keegan noted, as she concluded her findings.

She also said that allegations that some of the victims were gunmen were “wrong” and “should be dispelled”.

The inquiry found that some of those killed were shot by soldiers who served in the Parachute Regiment, a unit which was also involved in the killing of protesters in County Derry months later at an infamous event that became known as Bloody Sunday.

The inquiry has not charged or convicted anyone over the deaths, as it was not a criminal trial, and the identities of the soldiers behind the shootings were not revealed, leaving unanswered questions for the families of the victims.

An estimated 3,600 individuals died during the violence between Irish nationalists, British loyalists and UK soldiers, which ran from the late 1960s until the signing of the Good Friday Agreement in 1998.

The report’s release comes as the UK government remains in consultation with ministers in the Republic of Ireland over Westminster’s plans to introduce legislation limiting the prosecution of British soldiers who served in Northern Ireland during the Troubles. While the UK government has not confirmed what steps will be taken, it’s been floated that a Truth and Reconciliation Commission is favoured, dropping the possibility of criminal action against military figures.