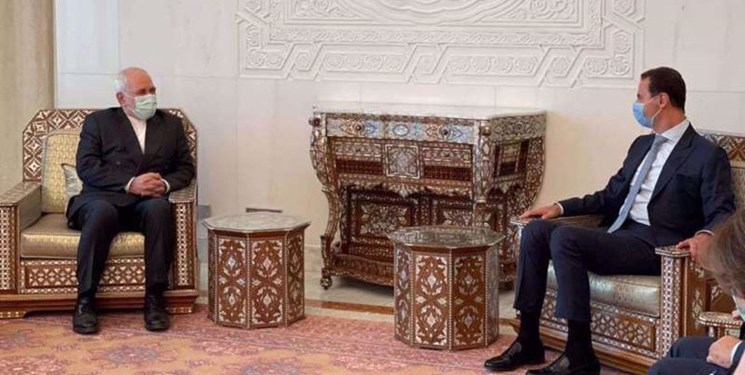 TEHRAN (FNA)- Iranian Foreign Minister Mohammad Javad Zarif called on the international organizations, specially the Organization of the Islamic Cooperation (OIC), to take action to materialize the rights of the Palestinian people.

Zarif made the remarks during a meeting with Syrian President Bashar al-Assad in Damascus on Wednesday.

He pointed to the crimes of the Israeli regime in the occupied territories against the defenseless people of Palestine, and condemned the atrocities in the strongest terms.

Zarif also stressed the need for the intervention of international organizations as well as the Organization of Islamic Cooperation in pursuing the rights of the Palestinian people, and highlighted the role of countries of the resistance front in this regard.

He also expressed satisfaction with the Syrian government's preparations for the upcoming presidential election slated for May 26, and expressed hope that the vote would be held successfully.

The upcoming presidential vote will be the second since foreign-backed militancy broke out in Syria in 2011.

Incumbent Assad is among the three candidates out of 51 whose candidacy has been accepted to run in the vote.

The promotion of bilateral relations, specially cooperation in the economic and cultural fields, as well as opening of Iranian consulates in the Syrian cities of Aleppo and Latakia were among other issues raised by Zarif in the meeting.

Zarif also briefed the Syrian president on the Vienna talks aimed at reviving the 2015 Iran nuclear deal, as well as Iran’s measures in connection with the latest regional developments.

During the meeting, President Assad praised the Islamic Republic's support for Syria in the fight against the terrorist group of the ISIL.

He also said Zarif’s visit in the run-up to the Syrian presidential election and amid the current situation in the Israeli occupied territories was of high significance.

The Syrian leader also shared Damascus’ views on the developments with the Iranian foreign minister.

Also on Wednesday, Zarif said that Iran is to open its consulate in Syria’s northwestern city of Aleppo, adding that the mission will be opened in the city following an earlier agreement by President Assad and the Arab country’s foreign ministry.

“I hope that the opening of the Iranian Consulate in Syria will help expand economic, cultural and trade cooperation between the two countries,” he told reporters after his meetings with President Assad as well as his counterpart.

The top Iranian diplomat also pointed to the upcoming Syrian presidential election, saying the vote is of “paramount importance to peace, security, stability and progress in Syria.”

He also expressed Iran’s readiness to act as an observer in the election.

“We are ready to be present [in the process] as an observer of the election, and we hope the Syrian people will guarantee their future as well as order and security in Syria with their turnout.”

Elsewhere in his remarks, Zarif touched on his discussion with the Syrian side on the recent spike in Israel’s acts of aggression against the Palestinians.

“We talked about the situation in the [Israeli] occupied territories and the possibility of the situation getting worse. It is clear that Israel's aggression will be met with resistance, and it is the duty of the international community to intervene to prevent the continuation of Israeli aggression,” he said.

Meanwhile, the Iranian foreign minister met with Damascus-based leader of the resistance front, during which he derided the invincibility claim of the Israeli regime.

“The heroic response of resistance groups against the Zionist regime showed that the claims of invincibility of the Iron Dome were false lies,” Zarif said.