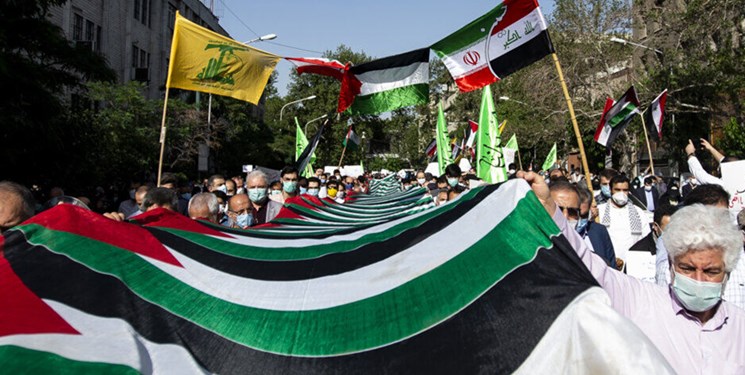 TEHRAN (FNA)- The Permanent Secretariat to Support Palestinian Intifada of the Iranian Parliament called on the world's legislatures and non-governmental organizations to support the legitimate defense of the Palestinian people, and emphasized that the Zionists only understand the language of power and resistance.

"The coincidence of the anniversary of 'Nakba Day', the day of the illegitimate recognition of the fake, colonial and racist Israeli regime in the great and historic land of Palestine with the intensification of the Intifada and the fire of the anger of the fighting and heroic nation of Palestine against the Zionist and terrorist occupiers, is an emphasis on the continuation of the legitimate resistance of the Palestinian people against the annulment of the British and American colonialists' measure to establish the fake Israeli regime," the Permanent Secretariat of the International Conference in Support of the Palestinian Intifada in the Islamic Consultative Assembly said in a statement.

It noted that seven decades of resistance and struggle of the Palestinian people and their heroic defense of Al-Quds and Al-Aqsa Mosque sends a clear message to the United States and its Zionist supporters which with a continuation of their blind support against the genuine Palestinian people, including Muslims, Christians, and Jews pouring fule into the policy of inciting war in the region."

"Unfortunately, the silence of human rights defenders in the face of the brutal attacks of the Zionists and the massacre of the defenseless Palestinian people, especially women and children serve as another factor for the continuation of the Zionist aggression and their contribution in the war crimes," it added.

In a relevant development on Friday, Iran’s Foreign Ministry issued a statement on the occasion of Nakba Day which marks the anniversary of forging the illegitimate Israeli regime.

The statement said that 73 years ago, a terrorist regime was forged in Palestine through expulsion of the native people, and called on governments and international organizations to fulfill their duty to end occupation and continued crimes and aggressions against Palestinians by the Zionist regime.

"73 years ago, on May 15, 1948, the Palestinian people were deprived of their ancestral land and home by international conspiracies. A terrorist regime and foreign people were forged, instead," the statement reads.

"The Zionists have turned occupied Palestine into a base of terrorism against the Palestinian people and the Muslim nations of the region. During these 7 decades, the United States and some world powers have fully supported this evil regime and turned a blind eye to its endless crimes," it continued.

In relevant remarks on May 7, Supreme Leader of the Islamic Revolution Ayatollah Seyed Ali Khamenei in a speech on the International Quds Day stressed that Israel is not a country but a terrorist base against the people of Palestine and other Muslim nations.

"Since the first day, the Zionists turned the usurped Palestine into a terrorist base. Israel is not a country, but a terrorist camp against the Palestinian nation and other Muslim nations," Ayatollah Khamenei said.

"Fighting against this despotic regime is fighting against oppression and terrorism. And this is a collective responsibility," the Supreme Leader added.

Ayatollah Khamenei assured that the countdown for the Zionist regime has already started and “it will never stop”.