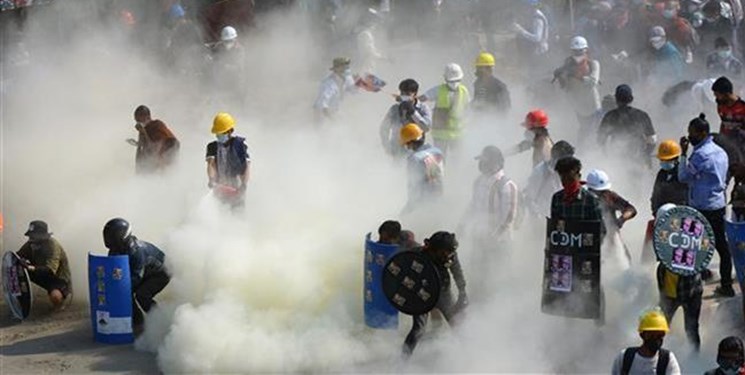 TEHRAN (FNA)- Myanmar’s military launched a battle against anti-coup armed fighters in the country’s Northwest as part of attempts to quell widespread protests that erupted after the junta seized power in February.

Citing local authorities and witnesses, media reports said on Saturday that Myanmar’s army had attacked fighters of the Chinland Defense Force in the Northwestern town of Mindat, in what was described as “some of the heaviest” rounds of fighting with local armed groups opposing the military coup, presstv reported.

Myanmar's anti-coup National Unity Government (NUG), set up by lawmakers who were blocked by the army from taking their seats in parliament following the coup, warned in a statement that, “Within the next 48 hours, Mindat can potentially become a battleground and thousands of people are facing the danger of being displaced”.

The military was said to have launched the battle against the fighters with artillery bombardments and helicopter attacks.

“We are running for our lives,” one resident told Reuters from Mindat, a hill town just over 100 km from the border with India.

“There are around 20,000 people trapped in town, most of them are kids, old people,” the resident said, adding, “My friend's three nieces were hit by shrapnel. They are not even teens.”

Meanwhile, Reuters quoted a member of the armed group as saying Sunday that the local militia fighters have pulled back from Mindat.

“To avoid confrontation, we retreated out of concern over damage to the town,” said one fighter, adding that only women and children remained in the town of more than 40,000 that was now largely occupied by the army.

“Since all the boys and men are involved in this fight, all of them are on the run,” the fighter added.

The Canada-based Chin Human Rights Organization also said in a statement that, “Mindat Town is now under siege and is bracing for an all-out assault by the junta troops from air and by land”.

The junta imposed martial law in Mindat on Thursday and then ramped up attacks on what it labeled as “armed terrorists” to quell the post-coup unrest.

Opposition groups said 15 young men had been seized by the junta forces and used as human shields as they advanced.

At least five civilians were reported to have been killed in clashes and some 10 others wounded.

The British and US embassies in Myanmar have both expressed concern about reports of fierce army attacks on the town.

The Chinland Defense Force, whose fighters are armed largely with home-made hunting guns, was set up in response to the February military coup that ousted the elected government of Aung San Suu Kyi.

The anti-coup NUG announced a plan earlier this month to unify Myanmar’s opposition groups such as the Chinland Defense Force into a national “People's Defense Force”, which would serve as a precursor to a “Federal Union Army” of democratic forces including ethnic minorities.

Khin Ma Ma Myo, deputy defense minister of the shadow government, said one of the duties of the People's Defense Force is to protect the country's resistance movement from military attacks and violence by the junta.

Myanmar has been rocked by daily protests since the coup and the subsequent death of hundreds of people at the hands of security forces.

Since then, waves of protests have been flowing, with the crowds demanding the release of Suu Kyi and other detained figures and the return of civilian rule.

In addition to the daily protests, strikes by workers in many sectors have brought the economy to a standstill in the midst of the coronavirus pandemic.

According to a local monitoring group, at least 788 people have been killed in the junta's brutal crackdown on anti-coup protesters.