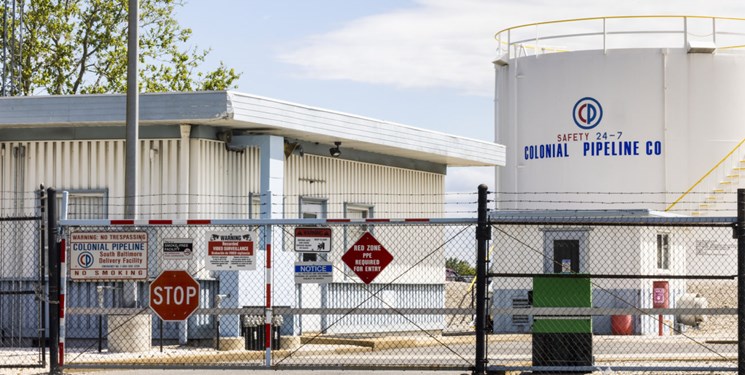 TEHRAN (FNA)- A vital gasoline pipeline that dried up after being hacked earlier this week resumed normal operations - although many gas stations it serves are still out of fuel.

Georgia-based Colonial Pipeline had begun the process of restarting the pipeline's operations on Wednesday evening, warning it could take several days for the supply chain to return to normal. A spokesman for the energy supplier says normal operations have now resumed.

However, 79% of gas stations in Washington D.C. are still out of fuel along with 37% in Virginia and 35% in Maryland, Gas Buddy petroleum analyst Patrick De Haan told Fox Business on Saturday.

The outlet noted that conditions appear to be improving as D.C. previously had 88% of its gas stations without fuel - while panic buying appears to have also slowed. Shortages also eased in North Carolina and Virginia, while remaining about the same in Georgia.

Colonial Pipeline had paid 75 Bitcoin, or about $5million, to a ransomware group for the decryption key after their network was held ransom, Bloomberg News reported.

"Since that time, we have returned the system to normal operations, delivering millions of gallons per hour to the markets we serve," Colonial Pipeline said in a tweet Saturday.

"All of these markets are now receiving product from our pipeline," the company said, noting how its employees across the pipeline "worked safely and tirelessly around the clock to get our lines up and running".

Gas shortages, which spread from the South, all but emptying stations in Washington, D.C., have been improving supplies slumped to their lowest levels on Thursday night.

More than 13,400 gas stations surveyed in the East and South by fuel tracking app GasBuddy were still experiencing outages on Saturday, down from 16,200 early on Friday.

Energy Secretary Jennifer Granholm told The Associated Press on Friday that the nation is "over the hump" on gas shortages, with about 200 stations returning to service every hour.

"It´s still going to work its way through the system over the next few days, but we should be back to normal fairly soon," she said.

Some stations were still out of gas in Raleigh, North Carolina, on Saturday. Driver Jermaine Barnes told CBS17 the shortage has made him more conservative with his trips.

Martha Meade, manager for public and government relations at AAA Mid-Atlantic, said many gas stations in the Virginia area still did not have gas on Saturday.

But she said "lines have diminished from the height of the crisis" and "panic buying has subsided".

The nationwide average for a gallon of regular unleaded was $3.04 on Saturday, from $2.96 a week ago, according to AAA.

The pipeline outage accelerated increases in gasoline prices that were "already rising due to higher crude prices and demand ahead of Memorial Day," said AAA Spokeswoman Ellen Edmonds, referring to the May 31 holiday that traditionally kicks off the US summer driving season.

Places served by the pipeline saw the biggest price jumps this week - 9 cents in D.C. and 21 cents in North Carolina - but they should also see prices decline again as supplies improve, Edmonds said.

Multiple sources confirmed to Associated Press that Colonial Pipeline paid the criminals behind the cyberattack the nearly $5 million in cryptocurrency last Saturday for the software decryption key required to unscramble the data network.

The hacking group blamed for the attack, DarkSide, said it had hacked four other companies, including a Toshiba subsidiary in Germany.

Colonial Pipeline has not determined how the initial breach occurred, a spokeswoman said this week.

The pipeline system delivers about 45% of the gasoline consumed on the East Coast.

Steve Boyd, a senior managing director at fuel delivery firm Sun Coast Resources, estimated that with gasoline moving on the pipeline at half Colonial's normal speed, it could take 12 to 20 days for new deliveries to reach the Northern-most point in Linden, New Jersey.

Sun Coast has 75 trucks taking supplies from terminals in Alabama and Georgia to retailers as far away as Virginia.

"If customers need us for another week or three weeks, we'll be there," said Boyd.