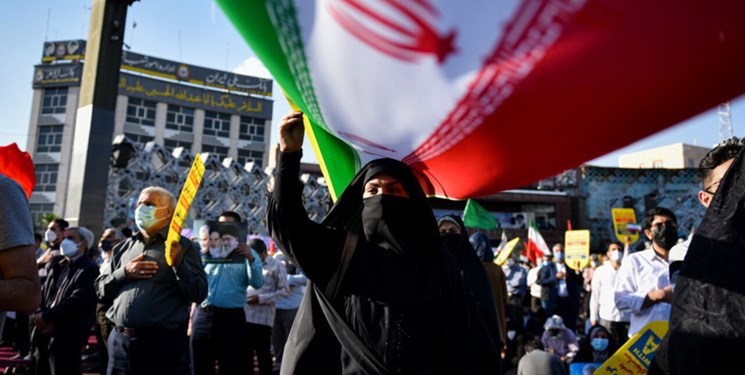 TEHRAN (FNA)- The Iranian people in the capital city of Tehran held a massive rally to display support for the Palestinian nation and condemn the Zionist regime's crimes.

During the rally on Wednesday afternoon, the Iranian people chanted slogans in support of the Palestinian resistance, and deplored the deadly Israeli aggression on Gaza and the West Bank, which has left over 227 Palestinians martyred, nearly half of them children and women.

The demonstrators issued a resolution at the end of the rallies in which they hailed the Palestinian resistance and the sacrifices of the young Palestinian generation in occupied Quds and other occupied Palestinian lands.

The final statement further described the "Deal of the Century" and normalization of relations with the Israeli regime as a disgrace, condemning some Arab states for staying silent and being an accomplice in the face of the Israeli regime's crimes.

The Iranian people further advised the Zionists to pack their luggage and leave the occupied lands as soon as possible before the Palestinian resistance equipped with missiles razes their cities to the ground.

Elsewhere, the statement condemned the recent brutal terror attack on schoolgirls in the Afghan capital Kabul as a crime against humanity and declared their solidarity with the oppressed Afghan people.

The demonstrators also called for a massive turnout in the upcoming presidential elections in line with the guidelines of Leader of the Islamic Revolution Ayatollah Khamnei to deal a blow to the enemies.

According to the United Nations, more than 58,000 Palestinians in Gaza have been displaced from their homes, many huddling in UN-run schools that have in effect become bomb shelters.