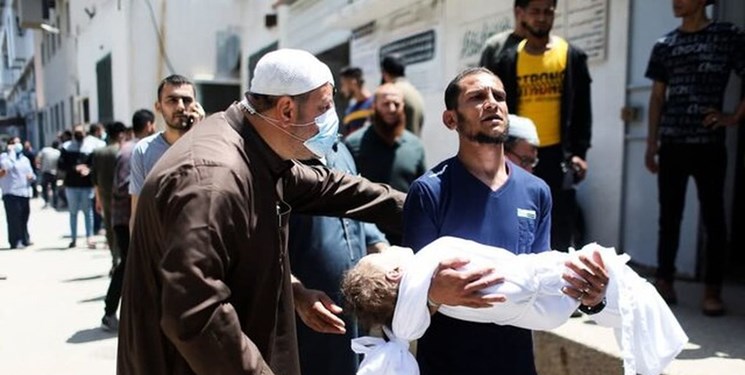 The embassy, in a letter to Islamic organizations in London, strongly condemned the recent round of Israeli attacks in Palestine, and urged the bodies to stand firmly against the aggression of the usurper regime and help realize the goals and inalienable rights of the Palestinian people.

The letter said that for eleven days Israel has been killing people in Gaza Strip and the occupied territories and the fake Zionist regime has martyred hundreds of Palestinian civilians, half of whom are women and children.

The statement added that the Zionists claim that they are targeting Hamas commanders, but the martyrdom of children and women nullifies these claims in the best way.

More than 11,300 Palestinians have also been injured in the Israeli airstrikes that have targeted the coastal enclave’s infrastructure, destroying homes, roads, medical facilities, schools, power lines and sanitation and sewage systems across the impoverished territory, which has been under Israel’s siege for more than a decade.

In relevant remarks on Monday, Iran’s Foreign Ministry Spokesman Saeed Khatibzadeh criticized the silence of governments and global organizations towards the recent Israeli crimes in Palestine, stressing that resistance is the only way to confront the Zionist regime.

"Iran calls on governments and international responsible organizations to end their unacceptable neutrality towards the aggressor," Khatibzadeh said, adding, "As long as the steadfast nation of Palestine has not achieved all its rights over the entire land of Palestine, legitimate resistance is the only way to counter the aggression and occupation of this regime."

"The Islamic Republic of Iran strongly condemns the new round of brutal aggression by the Zionist regime against the defenseless people of Palestine and the Gaza Strip, which has resulted in the martyrdom of dozens of civilians, including women and children, and the destruction of many residential buildings," he continued.

"Unfortunately, due to the shameless support of some Western countries, the Zionist regime's aggression has intensified. Therefore, the Palestinian people have an inherent and natural right to defend themselves," the spokesman noted, adding, "Reclamation of Palestinian rights is not just an Arab-Islamic issue, but a global responsibility. The Islamic Republic of Iran - along with the Islamic nations and all the free nations that are committed to defending the oppressed - stands by the heroic people of Palestine."

“Iran believes that the criminal acts of the occupying regime amount to crime against humanity and should be recognized as genocide,” he stated.

"In addition, we warn the international community that the Zionist regime is trying to achieve unholy and dangerous goals by causing insecurity and instability all over the region, which will ultimately threaten world peace and security," Khatibzadeh said.

"Thus, we call on the UN Security Council to fulfill its inherent mission and duty by pressuring the Israeli regime to end its aggression and terrorist operations immediately," he went on to say.

"The only just solution to the Palestinian issue is to hold a referendum with the participation of all original Palestinians, Muslims, Christians and Jews, for the right to self-determination," the diplomat stressed.