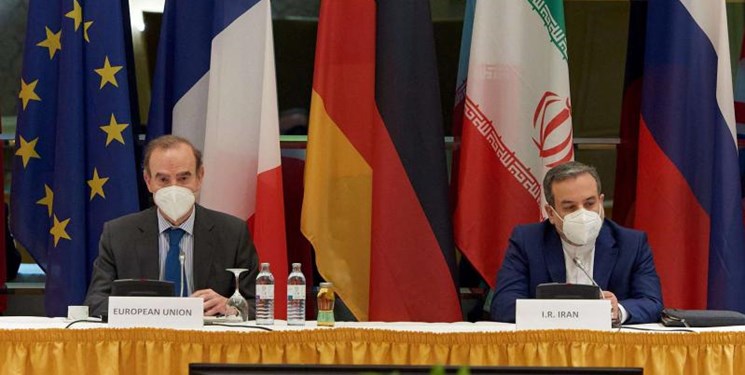 TEHRAN (FNA)- Iran’s top nuclear negotiator Abbas Araqchi said the talks in Vienna may continue for more rounds, stressing that serving the country’s interests are the main criterion for the negotiating team.

“It cannot be said surely that this will be the last round of talks,” Araqchi said, adding that the negotiations will continue until the country's interests are fully served.

Referring to the 5th round of the nuclear deal Joint Commission Meeting on Tuesday in Vienna, he continued, "Serious and important issues still remain in Vienna talks that need to be resolved. Of course, the number of these issues has decreased, and we have advanced a lot in writing the draft in previous periods. We can move forward further, but the few issues that remain are still key issues that need to be decided."

"It is important that what serves Iran's national interests must be carefully considered and met in the negotiations and in the written drafts that are written," the diplomat said.

The 5th round of nuclear talks between Iran and 4+1 group of countries on revival of Joint Comprehensive Plan of Action was in Vienna on Tuesday afternoon with the participation of the representatives from Iran and the remaining signatories to the deal namely Russia, China, the UK, France and Germany.

Before taking part in the 5th round of meeting of the nuclear deal’s Joint Commission in Vienna on Tuesday, Araqchi announced that serious and key issues have still remained unresolved in talks between Iran and the Group 4+1 (China, Russia, Britain and France plus Germany) in Vienna.

“Today, a new round of our negotiations with the G4 + 1 countries will begin. In the past (the last four rounds of talks), we have made relatively good progress and paved a special path and we know that we have to move along a clear path,” Araqchi said.

“Serious and important issues still need to be resolved,” he added.

“Today, we will start the negotiations again and God willing, we hope to be able to reach the final solutions during the next few days of negotiations,” Araqchi said.

He noted that the meetings of the Joint Commission include holding formal and informal bilateral and multilateral negotiations, and added, “We had bilateral talks even before the start of the joint commission. I just had a very good meeting with the Russian delegation in which we reviewed the issues that need to be addressed in the negotiations, and thanks God, there were good common positions over a majority of issues.”