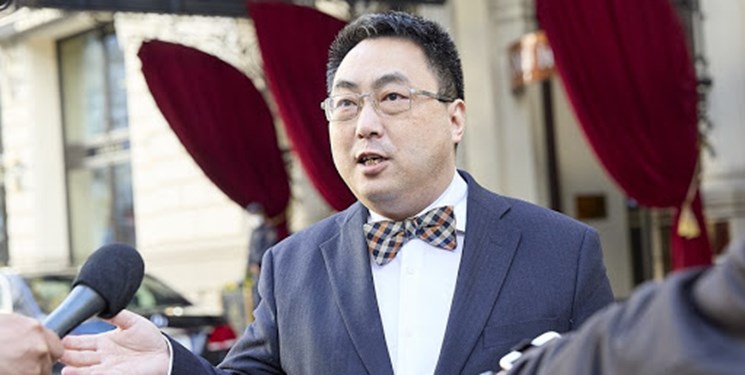 TEHRAN (FNA)- Chinese Envoy to the UN and other international organizations in Vienna Wang Qun underlined the need for addressing Iran's concerns during talks in the Austrian capital to revive the nuclear deal, including a complete removal of sanctions.

Qun said on Wednesday that Iran’s legitimate concerns should be properly addressed during the Vienna talks.

He pointed to important progress made so far in the negotiations, but said there are some key differences on issues related to the lifting of the sanctions.

Qun added that the primary topic of the sanctions removal has not been settled in the talks, which have dragged on for more than two months, saying this fact shows that the issue of right and wrong has not yet been fundamentally resolved.

Also, Russia’s representative to the international organizations in Vienna said that talks in the Austrian capital on a potential revival of the 2015 Iran nuclear deal may need “additional time” to reach a breakthrough, emphasizing that nothing is agreed until everything is agreed.

Mikhail Ulyanov made the remarks in a tweet on Wednesday in response to reports that Moscow was optimistic about progress in the Vienna talks between the parties to the Joint Comprehensive Plan of Action (JCPOA).

“Not necessarily. We simply observe steady progress at the Vienna talks on #JCPOA. We recognize this obvious fact. But we are always cautious in our assessments: nothing is agreed until everything is agreed. We are very close to this stage but it may take additional time,” he wrote.

Also, Iran's top negotiator and Deputy Foreign Minister Seyed Abbas Araqchi said that despite the progress made in talks between Tehran and the Group 4+1 (China, Russia, Britain and France plus Germany) in Vienna, certain critical disagreements have still remain unresolved.

Araqchi said on Thursday that the next round of talks in Vienna could be the final one, as the participants in the nuclear deal and the US should take their difficult decisions.

He added that after the fifth round of talks in Vienna to revive the Iran nuclear deal, formally known as the JCPOA, delegations felt necessary to return to their capitals once again after 10 days of intensive negotiations.

Many hoped that this would be the final round, but delegations decided to return to their capitals to use one week of opportunity for consultations and then resume talks, Araqchi said.

He also said that the remaining disagreements have been discussed and solutions have been proposed, but these solutions should be reviewed to choose the best one.

Iran’s stance remained unchanged, the top negotiator stressed, but what is important is that arrangements on the US return to the deal and Iran’s verification of sanctions removal and resuming full compliance to the JCPOA limitations on its nuclear program should be implemented in a manner agreed by both sides.

Araqchi underlined that a great progress has been made in the talks, but there were still few critical disagreements to be solved.

He went on to say that the next round should be sensibly the final round if other sides conform to Iran’s stances, otherwise, there would be no deal or talks would continue.

Araqchi said that no timing has been set for the next round, but parties decided to have one week break.