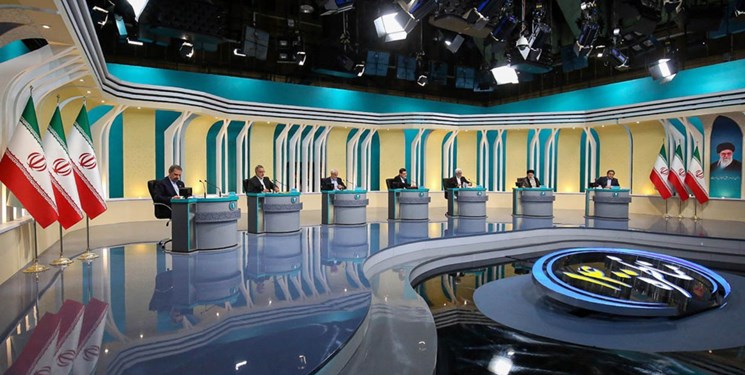 TEHRAN (FNA)- The seven presidential candidates in Iran participated in a second showdown to express views and challenge each other on a wide range of social, political and cultural issues.

The debate, held on Tuesday (June 8), meagerly resembled the previous round of fiery openings and lightning attacks on rivals.

The second debate featuring all the seven candidates running in Iran’s 2021 presidential election was marked by less aggressive confrontations but also overly broad delineations of policy, in what some of the candidates blamed on the format of the debate.

Focusing on social gaps, Ebrahim Rayeesi said it is because of injustice.

The candidate emphasized that the gap is because of mismanagement in the economy and the decision making.

He believed the pricing method and monitoring production and consumption would lead to the elimination of social gaps.

Mohsen Mehralizadeh, from the Reformist camp, said on Vienna talks and the Joint Comprehensive Plan of Action (JCPOA) that Iran is on the right track.

US maximum pressure on Iran failed due to the resistance of Iranians, he said, adding that the rights of the Iranian people must be restored.

Meantime, Saeed Jalili, from the Revolutionary camp, called for a change in the behavior of politicians and political culture to gain the trust of people.

If the budget is not reformed and the banking supervision system is not taken seriously, it will be an obstacle in the country's progress, he added.

The difficulties could not be solved with slogans and promises because the problems have economic roots, Mohsen Rezayee said.

"I have worked with all ethnic groups in my political life, and the Government of Action and Transformation will be formed of all Iranians. Hope is realized when new energy is released in society," he added.

Abdolnasser Hemmati, another candidate from the Reformist-Moderate camp, said that monopoly in the economy, politics, culture, and media are the main cause of inefficiency and corruption.

He also stated that the competitive market has an important role in the development of the country. Still, the government has strong responsibilities in three areas: Health, education, and addressing the vulnerable classes.

"Salam Government" seeks to reform the bureaucracy, which is a big problem, Amir Hossein Qazizadeh Hashemi, a Principlist candidate, highlighted.

Several Principlist candidates attempted to reject a Reformist accusation that they were running as mere “back-ups” for Ebrahim Rayeesi, the highest-profile candidate and the current head of the Judiciary. Mohsen Rezayee, a seasoned politician, said early in the debate that he would stick around until the end of the race and would not drop out in anyone else’s favor.

Also a recurrent theme was attacking and defending against Nasser Hemmati, until recently the governor of the Central Bank of Iran and the perceived representative of the President Hassan Rouhani administration. Hemmati is seen by the public and the opposite politicians as a major cause of economic flaws.

But the mood of the second debate was by far less confrontational than that of the previous round. And the candidates also responded to the questions put to them by the moderator more straightforwardly in this round.

Iranian presidential candidates wrapped up a second showdown on live television, days after a first debate on economy between two contrasting political views.

During the first showdown on Saturday, the five candidates associated with the Principlist camp attacked the eight-year performance of outgoing President Hassan Rouhani, a Moderate in alliance with the Reformist camp.

In turn, the two other candidates, known as Reformists, pointed the finger of blame at the Principlists for worsening the country’s economic problems.

A poll held by the University of Tehran showed that 56% of people who watched the first debate believed that Rayeesi was the winner of the first showdown. Hemmati with 8%, Qazizadeh Hashemi with 6%, Jalili with 4%, Rezayee with 3%, Mehralizadeh with 3% and Zakani with 2% of votes ranked second to 7th in the first debate. Also 18% of people responded that they favored none of the candidates’ remarks or responded “I don’t know”.

The disapproved candidates had the opportunity to protest at their disqualfication vote and the qualified candidates can start their campaign as of May 25 until 24 hours before elections.