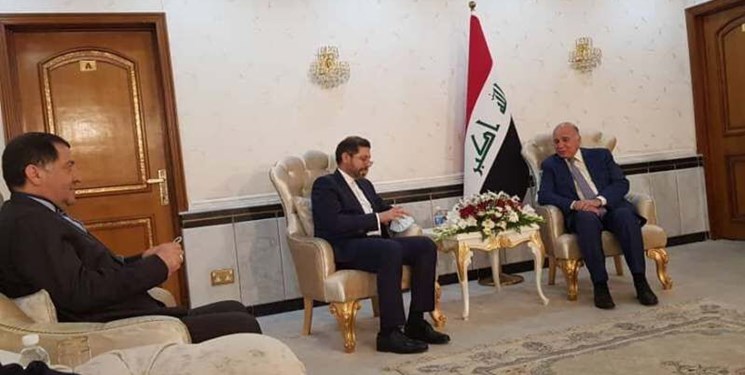 Khatibzadeh arrived in Baghdad on Wednesday morning to hold meetings with Iraqi officials.

After meeting with several Iraqi officials, the Iranian spokesman met with Fuad Hussein to discuss issues of mutual interest, regional developments, and the development of bilateral relations.

Iraqi debts to Iraq, the Shalamcheh-Basra railway, the latest developments pertaining to Baghdad's latest visa waiver, and how the two countries cooperate in the areas of public diplomacy were discussed by Khatibzadeh and Hussein.

Prior to meeting with the top Iraqi diplomat, the spokesman of the Iranian Foreign Ministry met with Qassim al-Araji, Secretary of the National Security Council, former Prime Minister Nouri al-Maliki, and the Leader of Islamic Supreme Council of Iraq Sheikh Dr Hamam Hamoudi.

He also met with some Sunni scholars and visited the Al-Tamiz Strategic Institute. The Iranian diplomat also visited Al-Nahrin Studies Institute, addressed a gathering of Iraqi scholars and lecturers on the latest regional developments and Iran-Iraq relations, and answered questions put forward by the audience.

All-out support for the Iraqi government and legitimate and democratic processes in accordance with the will of the Iraqi people, the Iraqi parliamentary elections, the grounds for the comprehensive expansion of relations between the two countries, the fields for bilateral cultural and media cooperation and the explanation of Iran's policy towards Iraq and a strong, free, prosperous, developed, united and independent Iraq were among other topics discussed in the meetings.

Iran's ambassador to Baghdad Iraj Masjedi said last week that his country and Iraq are one spirit in two bodies, adding that Tehran is proud of defending oppressed Muslims in the world.

“Iran and Iraq are like one spirit in two bodies,” Masjedi said at a ceremony in Baghdad to mark the anniversary of Imam Khomeini’s passing away, and added, “The Islamic Republic is proud of defending the oppressed Muslims in the world.”

He stressed that no force can separate the Iranian and Iraqi nations from each other.