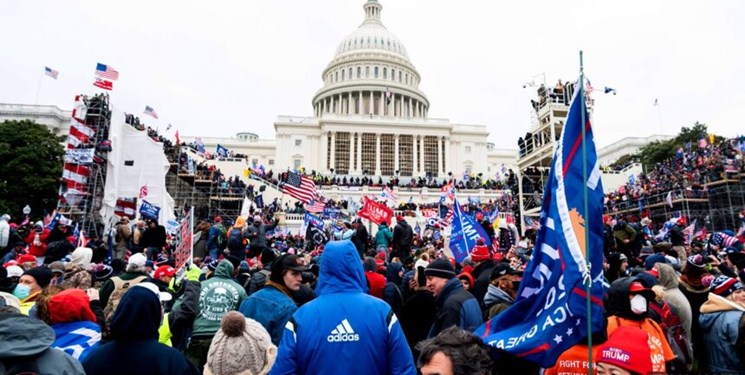 TEHRAN (FNA)- A new survey spanning 16 nations and regions, most of them US allies, has shown the country's global image rebounded after President Joe Biden succeeded former President Donald Trump, but not a single country believed the United States any longer constitutes a good example for democracy.

The Pew Research Center published on Thursday the results of its Spring 2021 Global Attitudes Survey, the first of its kind since Biden took office in January. It was a historically rocky transition of power that unseated a US leader whose tenure was marked by a sharp decline in international confidence in US leadership, Newsweek reported.

And while some of this trust has recovered in the few months of Biden's White House, there remained a prevailing attitude that "democracy in the US used to be a good example, but has not been in recent years".

These opinions echoed across the Atlantic to Europe, where the sentiment that the US today is not a model democracy was held by 57% in the Netherlands, 56% in Sweden and the United Kingdom, 54% in Germany, Belgium and Spain, 53% in France, 49% in Italy and 45% in Greece, where, as in France and Germany, 27%—the highest response recorded—felt the US had never served as a democratic model.

The trend was even stronger across the Pacific. The idea that "democracy in the US used to be a good example, but has not been in recent years" was shared by some 73% in South Korea, 67% in Japan, 66% in Singapore, 64% in Australia and 63% in Taiwan and New Zealand, which also had the largest share of respondents saying "democracy in the US has never been a good example for other countries" at 27%.

Across these 16 countries, a majority of 57% believed that the US was no longer the democratic leader it used to be, while 23% felt it never was, and only 17% felt it still is.

"While attitudes are mixed about how well the US political system functions, publics in the advanced economies surveyed are largely skeptical that democracy in the US is a good example for other countries to follow," an accompanying Pew Research Center report stated, adding, "Across all democracies surveyed, no more than about three-in-ten say the US is currently setting a good example of democratic values."

"Rather", it added, "majorities or pluralities say American democracy used to be a good example but has not been in recent years, and up to about a quarter reject the idea that the US has ever been a good model of democracy".

The poll also demonstrated a major recovery in the opinions of the US in 12 of these countries in which data was available (excluding Belgium, New Zealand, Singapore and Taiwan) since Trump left office, with an average upward trajectory of more than 24%. Germany and France's favorability rating of the US doubled in this time period.

But even among them, skepticism lingered.

A separate poll published earlier this week by the Bertelsmann Foundation and German Marshall Fund showed perceptions of US influence in the world have not recovered since the COVID-19 pandemic or Biden's swearing-in. On the other hand, views toward the clout held by the US' top competitor, China, increased slightly.

"The first three months of the Biden administration have not affected French and German views of US influence in the world, as these numbers are in line with the post-pandemic results of the 2020 survey (55% for France and 54% for Germany), which had fallen by about 10 points from the pre-pandemic numbers, to the advantage of China," the accompanying report for that poll observed.

The figures come as Biden heads to Europe on his first international tour, beginning with an appearance alongside world leaders of the Group of Seven, or G7, comprised of Canada, France, Germany, Italy, Japan, the United Kingdom and the US, as well as the European Union.

There, at the seaside town of St. Ives in Cornwall in the United Kingdom's, Biden's goal will be "strengthening the alliance and make it clear to [Russian President Vladimir] Putin and to China that Europe and the United States are tight, and the G7 is going to move," the president told reporters upon his departure.