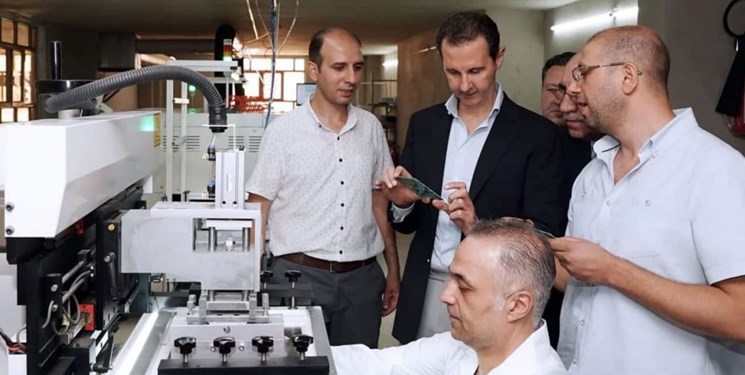 TEHRAN (FNA)- Syrian President Bashar Al-Assad said his administration is capable of overcoming the US-led blockade, reducing the impact of Western sanctions and creating more investment opportunities across the country.

The president made the remarks after visiting a number of factories and facilities at Adra industrial city in the Damascus countryside.

During the visit, the Syrian president inspected the complex and discussed the means of boosting production and overcoming obstacles facing a number of industries.

“I am very happy with my visit today to Adra industrial city and meeting with a number of Syrian industrialists… this city which has been on the front line between the army and terrorists since many years…but it has withstood… my visit today aims to stress the priority of economy in the upcoming stage,” Assad added.

The president stressed that the country needed investment, strong will and the patriotic sense for reconstruction.

"These three basic factors give momentum to many investors to establish industries in different areas, investments or productive facilities in other areas in Syria,” he added.

The president also hailed the spirit, innovation and passion of workers and managers at the industrial complex.

“This patriotic spirit that I have already touched at supervisors of the work and workers gives several messages in Syria." he said.

“What I have seen today can’t be described except as excellent, taking into consideration the circumstances to which this region has lived during the years of war and the conditions to which the Syrian economy passes through."

More than a third of Syria’s infrastructure has been destroyed or damaged due to the militancy over the past years. This includes significant damage to more than a third of the housing stock and half of health and education facilities.

The European Union and the US along with their Middle Eastern allies are viewed as the main sponsors of the militant groups and notorious terrorist outfits operating, since early 2011, to overthrow the government in Damascus.

Simultaneously with the militancy they have been fueling in Syria, the EU and US have imposed a host of unilateral economic sanctions on the Arab nation over the past decade in what appears to be an attempt to deny the Damascus government of its financial resources and hamper its fight against the terror groups they have been supporting.

Damascus has also been critical of the United Nations for keeping silent for the destructive role of the US and EU, among other parties supporting terrorism in Syria.

Reconstruction is a key to restoring stability to the country, because without it the Syrians’ living conditions could deteriorate and perpetuate instability.

European governments have declared that they will not bankroll reconstruction in Syria under the current administration. US and EU sanctions on Syria, meanwhile, prevent Western companies from investing in the Arab country's recovery.

Hence, the Syrian government looks to friendly states such as Iran, Russia and China and its citizens living abroad to fund reconstruction.

Al-Assad has made it clear that the West "won't be part of reconstruction in Syria, because very simply we won't allow them to be part of it, whether they come with money or not".

Syria’s Permanent Mission to the United Nations also denounced attempts by some members of the UN Security Council to extend a so-called cross-border mechanism for aid deliveries to the war-torn Arab country as “a political and humanitarian blackmail”, stressing the mechanism violates Syrian sovereignty and territorial integrity.

The mission, in a statement, denounced latest remarks by US Ambassador to the United Nations Linda Thomas-Greenfield about humanitarian situation in Syria, stating they are part of an open propaganda campaign by Washington and its Western allies to renew the mandate of the so-called Cross-Border Assistance Mechanism.

“Western countries claim they would be able to meet Syrians’ needs under this mechanism. At the same time, they threaten to cut off funding the United Nations humanitarian activities in Syria if the mechanism is not extended,” it said.

“The US ambassador’s allegation that she is concerned about the humanitarian situation in Syria, in addition to the claim that her country provides humanitarian aid to Syrian people, represents an outrageous political hypocrisy, and is in stark contrast to inhumane sanctions imposed by Washington on the Syrian nation. The sanctions represent an economic terrorism and are a collective punishment of Syrian people,” it said.

It added that such measures "negatively limit the Syrian government’s ability to address ordinary Syrians’ needs, and to offer basic services to them as cited by the UN World Food Programme (WFP) and the Food and Agriculture Organization (FAO) in a recent joint report”.

The statement went on to say that the US diplomat aims to divert the world public opinion from the fact that the aid delivery mechanism for Syria violates the Arab country’s sovereignty, unity and territorial integrity and, at the same time, lacks transparency in terms of supervision and verification because it is not possible to identify partners involved in the process of delivering aid and it cannot be guaranteed that a great proportion of the aid deliveries would not fall into the hands of terrorists.

“Washington’s insistence on undermining Syria’s sovereignty and territorial integrity, either through the illegal entry of its delegations or extension of the mandate of the so-called cross-border assistance mechanism, are in flagrant breach of the international law, and represent a political and humanitarian blackmail,” it noted.