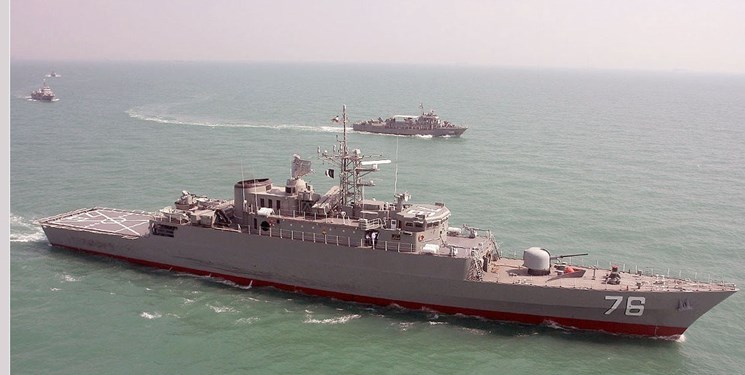 “Dena destroyer will be dispatched to sail the international waters and towards the Gulf of Aden, Bab al-Mandeb Strait, and the Red Sea to ensure the security of the Iranian navy in various maritime routes, Khanzadi made the remarks in a virtual ceremony on Monday to celebrate the joining of the destroyer as well as the Shahin minehunter to the Iranian naval fleet.

"Presence in the international waters on behalf of the Iranian nation is the right of the Navy of the Islamic Republic of Iran’s Army," he said, noting that the ultimate goal is to expel foreign forces from the region.

"The measures of the naval units of the Army of the Islamic Republic of Iran in the transborder waters is in compliance with the international law of the seas and in accordance with our country’s defense policies," the commander stated.

"Iranian naval fleet, comprising Sahand destroyer and Makran ship has set off for the Atlantic Ocean for the first time without mooring in other countries' ports,” Rear Admiral Sayyari said, adding, “This powerful presence indicates the naval capability and authority of the Islamic Republic of Iran."

“We consider presence in international waters as the inalienable right of the Navy of the Army of the Islamic Republic of Iran and we will continue this path with authority,” he went on to say.

"The 77th strategic naval fleet of the Navy, comprising of Sahand destroyer and Makran ship, is present in the Atlantic Ocean for the first time to demonstrate the capabilities of Iran in the maritime arena," the commander noted.

"The fleet departed from Bandar Abbas on May 10 and after a long journey after thirty days of navigation and crossing the Cape of Good Hope, traveling 6,000 nautical miles (nearly 12,000 kilometers), is currently in the Atlantic Ocean," Sayyari said and added, "The fleet continues on its longest naval mission to the North Atlantic."

He stressed that the presence of the Iranian naval fleets in high seas is done under international maritime rules.

Sayyari emphasized that the mission of the strategic Navy of the Army of the Islamic Republic of Iran is to defend the water borders and protect the resources and interests of the country in high seas.