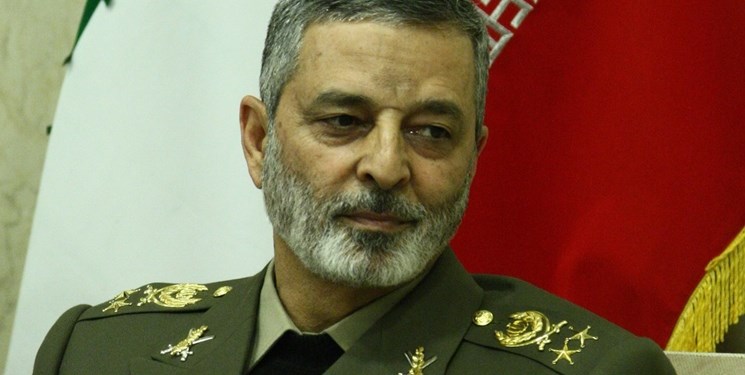 TEHRAN (FNA)- Iran’s Army Commander Major General Abdolrahim Mousavi said the presence of Iranian vessels in the Western Hemisphere is a turning point for the Navy.

General Mousavi said, during the ceremony to deliver Dena destroyer and Shahin minehunter to the Navy on Monday, that Iran’s naval vessels are capable of sailing 14,000 kilometers away from the country’s waters without docking in other countries’ ports, and added that this is a turning point for the Islamic Republic of Iran’s Navy.

He went on to say that no factor can hinder the mission of the Iranian navy in high seas.

In relevant remarks on Monday, Iranian Navy Commander Rear Admiral Hossein Khanzadi said that the world arrogance, headed by the US, has been embarrassed by the deployment of the Iranian warships in international waters in the Atlantic Ocean.

"Today, presence of Makran warship (floating forward staging base) and Sahand destroyer in the Atlantic Ocean is a demonstration of the country's scientific and military capabilities, and it is the first presence in the Atlantic that has embarrassed the arrogant powers and made them do miscalculation," Rear Admiral Khanzadi said, addressing a ceremony to deliver the home-made Dena destroyer and Shahin minesweeper to the Navy on Monday.

He said as stated by the Commander-in-Chief of the Iranian Armed Forces (Ayatollah Khamenei), free waters belong to all nations, and “we are entitled to the right to be present in the high seas and we have not been subdued by any threat and we will not accept any bullying.”

The commander referred to Dena and Shahin vessels, and said, “Today, the construction and development of such huge military structures is a sign of the depth of the country's capability in various military and scientific fields, the result of which ends up in such structures that are the manifestation of the country's power and will.”

"This is a message of peace and friendship to the free nations of the world, and it shows the power of the Iranian nation," Rear Admiral Khanzadi said.

“In the past, the Islamic Republic of Iran’s Army had succeeded in sending its fleets of warships to distant waters, including the Indian and Pacific Oceans and the Mediterranean Sea, and has now managed to fulfill its promise of deploying in the Atlantic Ocean by dispatching Makran warship (floating forward staging base) and Sahand destroyer,” Rear Admial Sayyari said on Saturday.

He added that the measure is a new chapter in Iran's naval presence in international waters, and stated, “Iran has shown that it has the potential to safeguard maritime economy beyond the Northern Indian Ocean and the Gulf of Aden.”

“Also, with its powerful presence in the high seas, Iran will be able to help strengthen the country's political diplomacy and help interaction and exchange of know-how and information among the world navies,” Rear Admiral Sayyari said.

“The presence of the strategic Navy of the Islamic Republic of Iran’s Army thousands of kilometers away from its shores has increased the strategic depth of our dear Iran. As always, we emphasize that such actions and missions are not a threat to any country and they can rather be useful in the framework of various treaties to maintain the security of countries, and to combat maritime terrorism and increase maritime rescue operations,” he added.

Rear Admiral Sayyari blasted certain countries which have colonial records and increased tensions and arms race with their fruitless presence in other regions for expressing concern about Iran's presence in the Atlantic Ocean, and said it shows the correctness of Iran’s decision to send fleet of warships to the region and send a message of peace and friendship.

Kirby had said that Washington is tracking the two Iranian vessels which could be carrying military equipment and may be bound for Venezuela and reserves the right to take "appropriate measures” if they are determined to pose a threat.

Also the Politico magazine had reported late last month that “the US national security community is monitoring two Iranian naval vessels whose ultimate destination may be Venezuela”.

Iranian Government Spokesman Ali Rabiyee deplored the comments by Kirby, and stressed Tehran's right to trade weapons with all the world states, including Venezuela.

“Interference in Iran's bilateral relations with other countries which are in accordance with international laws and norms as part of the natural rights of the two nations, is annoying and unacceptable,” Rabiyee told reporters in a press conference in Tehran last Tuesday.

“The Islamic Republic of Iran reserves the right to enjoy normal trade relations within the framework of international laws and regulations, and considers any interference and supervision of these relations as illegal and insulting, and strongly condemns it,” he added.

Kirby had said last week that Washington is tracking the two Iranian vessels which could be carrying military equipment and may be bound for Venezuela and reserves the right to take "appropriate measures” if they are determined to pose a threat.

Rabiyee said that as mentioned before, the friendly and normal relations between Iran and friendly countries are only for the benefit of the two countries and are not against any third country, adding that the concerns expressed by the US officials are irrelevant and unjustified.

“We warn against any interference with this legitimate business and will consider a spectrum of necessary and appropriate responses in case of a mistake,” he warned.

Rabiyee, meantime, blasted the US for seriously threatening the security and stability of the region by selling billions of dollars of weapons and military equipment to the Persian Gulf littoral states for years, and said the Islamic Republic of Iran has repeatedly warned against these destabilizing acts by the US which stir tension in the region.

“Also, regardless of what these ships are carrying, there is no ban on the purchase and sale of weapons by Iran, and Resolution 2231 approves it. The US did its best to maintain (arms) sanctions (against Iran) in this regard last year, but failed disgracefully due to lack of cooperation by other countries,” he said.