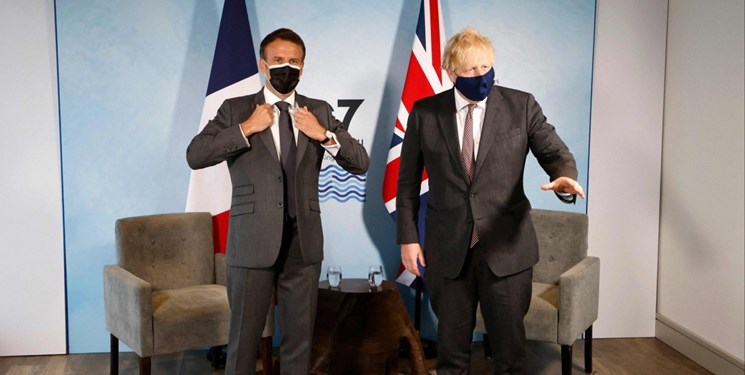 TEHRAN (FNA)- British Prime Minister Boris Johnson said the North Atlantic Treaty Organization (NATO) does not want a new Cold War with China, while French President Emmanuel Macron added the Group of Seven (G7) is not a club that is hostile to Beijing and should work with the Asian economy on multiple fronts, including climate change, world trade and development policies, despite sharing differences.

"When it comes to China, I don't think anybody around the table wants to descend into a new Cold War with China," Johnson stated upon arrival at the NATO summit in Brussels, CGTN reported.

"But I think people see challenges, they see things that we have to manage together, but they also see opportunities," he added.

NATO Secretary General Jens Stoltenberg also noted on Monday there is no new Cold War with China but the Western allies will have to adapt to the challenge of Beijing's rise.

"We're not entering a new Cold War and China is not our adversary, not our enemy," Stoltenberg told reporters at the NATO leaders' summit, a day after a summit of the Group of Seven (G7) where its leaders were wary of adopting confrontational rhetoric against China.

On Sunday, Macron told a news conference at the end of G7 leaders' summit in Britain that "China is an economic rival from whom we expect the full respect of (international trade) rules".

Some EU leaders, including German Chancellor Angela Merkel, are wary of Cold War-style rhetoric aimed at China and some do not like the term "adversary", which is often used by Washington when referring to Beijing, The Financial Times reported.

Italian Prime Minister Mario Draghi also urged the G7 not to cause undue offense to China, and stressed the need to cooperate with it.

On China, a joint communique of the G7 did not fail to mention issues such as Xinjiang, Hong Kong, Taiwan and the East and South China Seas, in the name of "upholding the rules-based international system and international law", despite pledging to cooperate with China to tackle "shared global challenges" like climate change and biodiversity loss.

In an earlier statement, a spokesperson for the Chinese Embassy in the United Kingdom stressed, "The days when global decisions were dictated by a small group of countries are long gone."

Also on Monday, German Chancellor Angela Merkel stated that leaders of NATO countries willl discuss topics including the challenges posed by Russia and China at their Brussels summit.