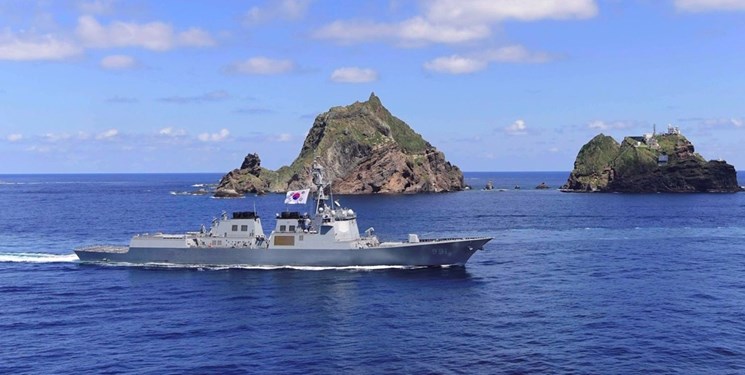 TEHRAN (FNA)- Seoul has launched annual war games around a set of islands also claimed by Tokyo in the East Sea, days after scheduled talks between Japan’s prime minister and the South Korean president were called off amid a dispute over and Olympics map.

The maritime exercise, called the East Sea Territory Protection Exercise, began on Tuesday near the islets, known as Dokdo in South Korea and Takeshima in Japan, the South’s Yonhap news agency reported.

The Korean drills, which have taken place twice a year since 1986, will reportedly mobilize naval and coast guard vessels, fighter jets and maritime patrol aircraft. No landing drill will be carried out given the COVID-19 pandemic.

The exercises angered Japan, which was quick to file a protest with Seoul over the maneuvers.

“This sort of drill is unacceptable and extremely regrettable,” he told a news conference, adding, “We’ve protested to the South Korean government and called for them to be halted.”

The long-running sovereignty dispute came to the surface again in early June, after South Korea lodged a protest over a map on the Tokyo Olympics/ Paralympics website marking the islands as Japanese territory and signing the East Sea only as the Sea of Japan.

Tokyo rejected Seoul’s demand to remove the depiction of the islets in the Olympics map, prompting the South to ask the International Olympic Committee (IOC) to mediate the dispute and some Korean politicians to call for a boycott of the games.

Earlier, Yonhap reported that Japanese Prime Minister Yoshihide Suga had taken issue over the drills and called off planned talks with President Moon Jae-in at the Group of Seven (G7) summit in the UK over the weekend.

In Tokyo, Kato hit back at the South Korean report, saying it was “one-sided” and the talks were not held due to some difficulties. However, the Japanese media said that the two leaders encountered each other along a G7 discussion on Saturday.

Reuters cited a South Korean Foreign Ministry official as saying that the meeting could not be held, without elaborating on the reason.

Although Japan and South Korea are considered as key US allies in the Asia Pacific region and have shared interest in denuclearizing North Korea, Tokyo and Seoul have serious disagreements over a series of issues besides the islets, including trade and the issue of compensation for victims who were forced work in Japanese firms and military brothels during Japan’s 1910-45 colonial rule.