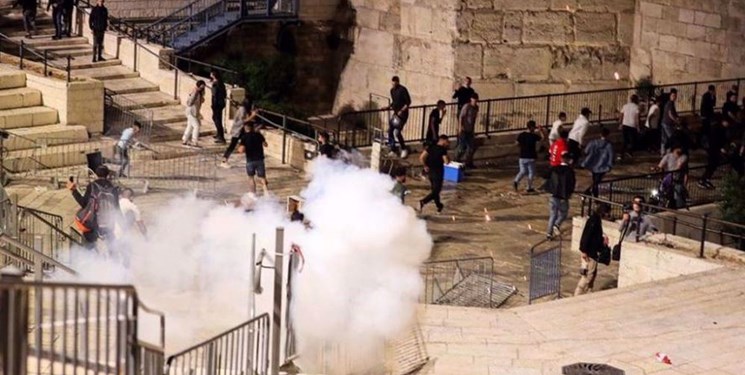 TEHRAN (FNA)- Palestinian groups hailed unity in confronting a march by Israeli extremists through the occupied East Jerusalem Al-Quds, which has become the latest lightning rod in the Middle East conflict.

In a statement on Tuesday, the committee for the follow-up of the affairs of the Palestinian National and Islamic Forces said “invading thieves” will not be able to damage the identity of Jerusalem Al-Quds, which is the eternal capital of Palestine.

“The Palestinian voice of truth was stronger than the voices of falsehood and terror that were protected by oppression. Those voices were defeated by the will of the people of Al-Quds, who added another achievement to the Al-Quds Sword,” the committee said, according to the Palestinian Safa news agency.

According to the committee, the march proved a failure and led to the creation of a new deterrent equation by the Palestinian people.

It came after Israeli far-right settlers took part in a flag-waving march through the occupied East Jerusalem Al-Quds in a provocative move that incited Palestinian protests.

The so-called March of the Flags celebrates the anniversary of Israel’s illegal occupation of the Eastern part of Jerusalem Al-Quds in 1967. Previous marches have included Israeli chants of “Death to Arabs” and Israeli aggression against Palestinian homes and shops in the Old City.

During the Tuesday march, at least 17 Palestinians were arrested by Israeli forces, with dozens more assaulted and forcibly removed from the Damascus Gate plaza leading to the Old City.

“We proudly mark a historic day in the march of our people and our cause, in which the Palestinian people were able to defeat the hatred of Judaization and settlement,” they said.

Hundreds of Palestinians in the besieged Gaza Strip also protested the provocative march on Tuesday, as tensions remained high over the Israeli regime’s forced displacement of Palestinian families from the East Jerusalem Al-Quds neighborhood of Sheikh Jarrah.

The march came less than a month after a truce ended the 11-day Israeli war on Gaza, which killed over 260 Palestinians, including 66 children, and displaced tens of thousands of Palestinians in the Gaza Strip.

Early on Wednesday, Israel violated the ceasefire by launching airstrikes on the Gaza Strip, causing material damage in the targeted areas.

The airstrikes targeted a site in Khan Yunis, South of the besieged Gaza Strip, and another site South of Gaza City. Tel Aviv said the airstrikes were conducted after Palestinian resistance groups launched incendiary balloons towards the illegal Israeli settlements adjacent to the Gaza Strip.

Palestinian resistance group Hamas confirmed the Israeli attacks, saying the Palestinians would continue to pursue their “brave resistance and defend their rights and sacred sites” in Jerusalem Al-Quds.