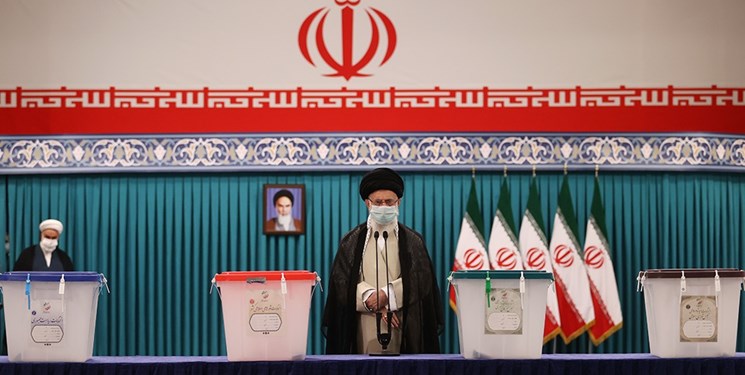 In the voting ceremony, Ayatollah Khamenei urged the Iranians to actively take part in the election, saying, "Election day is the day of the Iranian nation; ‌today they are the main director. It is people who, by going to the polls and voting, determine the general and fundamental task of the country for the coming years."

"The reason that we repeatedly invite people to participate in elections is that the first effect of this presence is reflected on the people themselves; of course, with this presence, the country and the Islamic Republic will also achieve great advantages in the international arena," he added.

In his earlier message, Ayatollah Khamenei had blasted the western media and enemies for their efforts aimed at undermining and weakening Iran, and stressed that people's participation in the presidential elections on Friday will secure the country against foreign plots.

The Supreme Leader's remarks came in televised speech on Wednesday before the 2021 presidential and city council elections in Iran.

Ayatollah Khamenei underlined in his speech that the destiny of the country depends on people's votes in elections.

"All the satanic powers and power centers that have opposed Iran's Islamic Revolution over the past decades have sought to tarnish people's minds and have sought to interfere in Iran’s elections," the Supreme Leader said.

Ayatollah Khamenei, however, pointed out that all the lections have taken place on time and there has not been a single day of delay in holding elections.

The Supreme Leader strongly blasted the western media for trying to question the upcoming elections in Iran.

"The people's participation will give more prestige to the Islamic Republic establishment," he added.

Ayatollah Khamenei underlined that the most important point is that elections show that the Islamic Republic enjoys support of the people and there is no power superior to people’s power.

The Supreme Leader pointed out that the people's participation will disappoint enemies once again, and said, "An action that disappoints enemies is considered a good deed."

Ayatollah Khamenei, meantime, pointed to the Iranian nation's achievements despite being under sanctions, and said that the young Iranian scientists have managed to develop and produce vaccines despite difficulties imposed on the country.

The Supreme Leader also pointed to the London-based Persian language TV channels which are financed by some Arab rulers, and said that “the irony is some countries that are ruled by tribes in the middle of the 21st century and they have had no experience of elections at all while their people do not distinguish ballot boxes from fruit boxes, they have established media to target Iran's elections".

More than a third of Iran’s 85 million population is under age 30. Women comprise more than half the population.

Commander of Iran’s Law Enforcement Police Brigadier General Hossein Ashtari said that over 600,000 police forces will be deployed in the country’s cities and towns to protect security of the presidential elections.