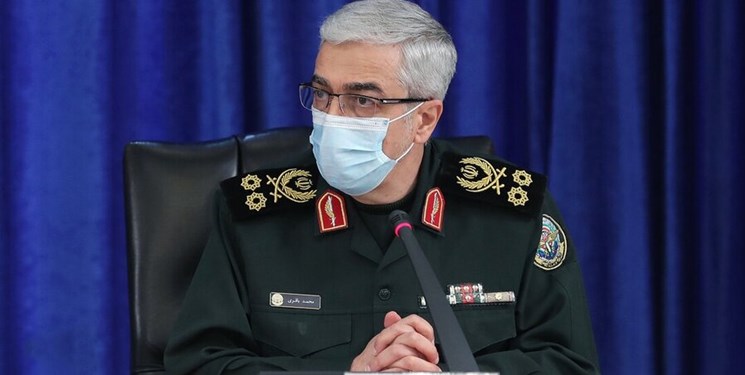 He added that all the Armed Forces’ possibilities have been mobilized to fight the coronavirus.

On Mar 16, 2021, Iran started the first phase of clinical tests on “Fakhra” vaccine, which has been developed by the Iranian Defense Ministry, by injecting a shot to the son of the top martyred nuclear scientist, Dr. Mohsen Fakhrizadeh.

Son of Martyr Fakhrizadeh, the top Iranian scientist, was the volunteer to receive the Iranian FAKHRA vaccine in its first human trial.

Organization of Defensive Innovation and Research, a department in Iran's Defense Ministry, which was previously led by Dr. Fakhrizadeh, has developed the vaccine. Dr. Fakhrizadeh was

Iran started the second phase of the clinical trial of ‘Fakhra’ vaccine with 500 volunteers, aged 18- 70, early this month.

Iranian Health Minister Saeed Namaki said on Monday that the country hopes to vaccinate all target groups against coronavirus by the end of fall, adding that Iran will be able to export its indigenized vaccine to foreign states in early winter.

“In addition to meeting the country’s needs to coronavirus vaccine by fall, we can be an exporter by early winter,” Namaki said, addressing a ceremony in the Northern province of Golestan.

“We hope to vaccinate the entire target population by the end of fall in the country,” he added.

Namaki also said that during efforts to develop infrastructures this year, 14,000 hospital beds will be added to the hospitals and other clinical centers across the country, adding that 470 oxygen generators joined the health sector.

The minister also said that the Iran-made Sputnik-V vaccine will be unveiled next Saturday in the presence of the Iranian ambassador to Russia.

Elsewhere, Namaki also blasted the US for imposing sanctions on Iran’s imports of vaccine, saying that Washington has just declared just in the past few days that it will lift the embargos on vaccine.

Iran’s High Council of Human Rights (HCHR) rapped the United States’ issuing sanctions waivers on the coronavirus-related items only after Tehran has made indigenous vaccines.

"82,000 Iranians were killed with the Coronavirus and the US issues sanctions waivers now after 16 months from the beginning of the virus spread and after Iran made its own vaccine," HCHR tweeted on Sunday.

“The Iranian nation's demand is to remove the illegal sanctions and punish those who imposed them," it added.

The US Treasury Department recently issued guidance easing the way for delivery of products such as face masks, ventilators, and vaccines to combat the coronavirus pandemic to heavily sanctioned countries like Iran, Venezuela, and Syria.

The guidance contradicts the previous remarks by US officials on exemption of humanitarian items from sanctions.

Senior member of Iran’s National Task Force for Fighting COVID-19 Minou Mohraz said last Wednesday that the coronavirus vaccine, COV-Iran Barekat, which has been developed by Iranian scientists at the Headquarters for Executing the Order of Imam Khomeini (HEIKO), is more efficient than the China-made Sinopharm vaccine.