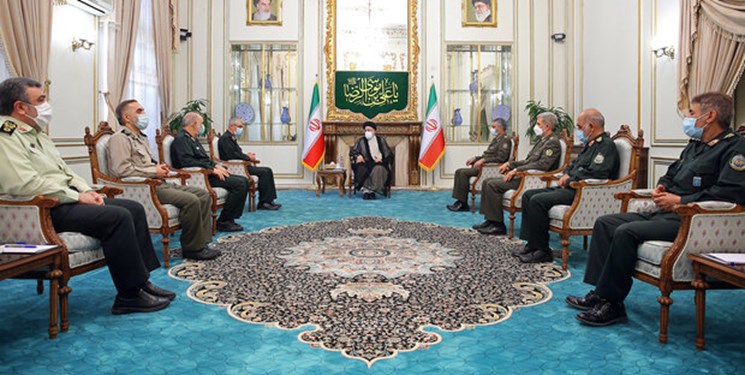 Chief of Staff of the Armed Forces Major General Mohammad Hossein Baqeri and a group of other high-ranking military commanders met with Rayeesi to congratulate him on victory in the Friday presidential elections.

General Baqeri and senior commanders of the IRGC, Army, Law Enforcement Police force, the defense minister and a group of other high-ranking military commanders met with Rayeesi at his office on Tuesday.

During the meeting, the senior military commanders emphasized readiness of the Armed Forces to assist the new government and upgrade the capabilities of the Islamic Republic in various fields and formation of a strong Iran.

Rayeesi, for his part, appreciated General Baqeri and other military commanders for their visit, and expressed the hope that the Iranian people would better off as compared to the past through using all the potentials available in the country.

Prior to the visit, IRGC Top Commander Major General Hossein Salami and members of the IRGC Command, as well as the Commander of the Police Force and a group of other senior police commanders had also visited Rayeesi at his office to congratulate him on victory.

Iranian Interior Minister Abdolreza Rahmani Fazli announced on June 19 that Rayeesi has been elected as the new president of the country with 17,926,345 votes cast in his favor in the June 28 elections.