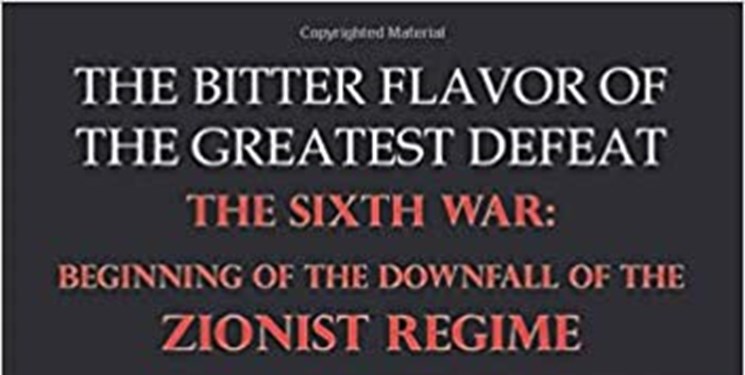 TEHRAN (FNA)- The International Association of Muslim University Professors published a new book about the historic defeat of Israel in the 33-day war against the Lebanese resistance group Hezbollah in 2006.

The International Association of Muslim University Professors announced publication of its new book, ‘The Bitter Flavor of the Greatest Defeat: The Sixth War, Beginning of the Downfall of the Zionist Regime’.

The book is written by Salman Raza Ali Qasim and translated, edited and annotated by Abu Yahya al-Hussaini.

The book provides an in-depth account of the historic defeat of the Zionist Regime in 33 days long war in 2006 at the hands of the powerful Hezbollah forces of Lebanon. This defeat shattered the myth of invincibility of Zionist regime since its illegitimate birth in 1947. A handful of Hezbollah resistance fighters guided by the highly capable, courageous and wise leadership of Seyed Hassan Nasrullah and armed with light weapons and faith in God were able to repeat the history of victorious battles fought at the time of Prophet Mohammad (PBUH). They were able to materialize the divine promise mentioned in the Holy Qur'an that the number of soldiers doesn't count in victory or defeat and those who believe in God and his Prophet (PBUH) and do not take enemies of God as their friends, are supported by divine spirit and will be successful. The Zionist regime suffered crushing defeat and has since gotten weaker in all aspects to prevent its ultimately predicted downfall announced by the Leader Seyed Ali Khamenei which is bound to come in the near future.

This book provides comparative details of the unmatchable military power of Zionist army and Hezbollah, daily events of war, the complicity of the US and Western powers with the Zionist regime, inert and conspiring role of Arab Nations and the UN during 33 days of war and unparalleled heroism of Hezbollah and unwavering support of Islamic Republic of Iran to the oppressed nation of Lebanon.

The book includes three sections: [1] The political aspect of war, [2] The military aspect of war and [3] The economic and social aspects of war. Each section sheds light on the historic defeat of the Zionist Regime in 33 days long war in 2006. The book also has Appendix that provides full text of historic speech of Seyed Hassan Nasrullah after the victory of Hezbollah,  message of Leader Seyyid Ali Khamenei to Seyed Hassan Nasrullah and important historic details related to Hezbollah, Palestine and Zionist army military conflicts.

IAOMUP hopes that this book will serve as a reference for the academic researchers and scholars worldwide to further study the myth of military power of the Zionist Regime and the emerging role of Hezbollah and its full support for the Palestinian Resistance in Middle East.

The book can be downloaded from here:

The Bitter Flavor of the Greatest Defeat: The Sixth War, Beginning of the Downfall of the Zionist Regime