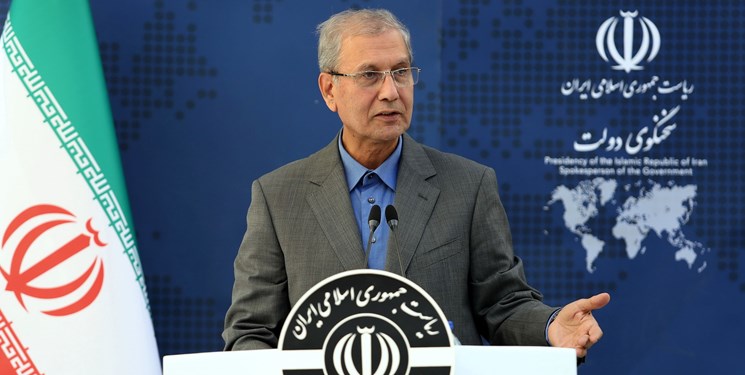 TEHRAN (FNA)- Iranian Government Spokesman Ali Rabiyee said that the recent sabotage act against one of the buildings belonging to the Atomic Energy Organization of Iran (AEOI) near Tehran failed to inflict major damage on nuclear equipment.

"I confirm the sabotage act but it has not led to significant human and equipment damage," Rabiyee told reporters in a press conference in Tehran on Tuesday.

He said there has been some slight damage to the roof of one of the sheds that is being replaced now, and added, "The aerial photo released in some media outlets showing damage to this site was, in fact, taken after the roof was removed for repair."

An AEOI building West of the capital came under a sbotage attack on June 23. Nuclear and security officials, then, said they thwarted the act of sabotage, adding that the attack had not resulted in any casualties or damage owing to tight security precautions adopted following similar acts of sabotage against Iranian nuclear sites and the assassination of prominent scientist Mohsen Fakhrizadeh last year.

Elsewhere, Rabiyee noted the latest developments in the talks in Vienna, and said, "Decisions on the revival of the Joint Comprehensive Plan of Action (JCPOA) are made at the highest levels, under the supervision and guidance of the Leader and in the Supreme National Security Council."

"Who and which administration will finalize the negotiations depends on the opinion of the Islamic Republic of Iran and the political will of the American side. At the moment, there is no change in the negotiating team, and I can say that the negotiation process is over, specially on difficult and technical issues," he added. "Unlike the US government, Iran sees the administration as a unified and sustained legal entity that adheres to all the international obligations of previous administrations."

"Thus, if an agreement is reached in the current administration, the next administration will undoubtedly abide by all its obligations. Experience has shown that the Islamic Republic of Iran has not violated its international agreements and commitments in the past, nor will it intend to do so in the future," the spokesman noted.

"The Vienna talks have seen good progress on many issues, but it is undeniable that there are differences of opinion on some issues. However, disagreements over the remaining issues do not necessarily mean a stalemate in the negotiations," he added.

"It is obvious that the Islamic Republic of Iran will not accept any agreement that does not serve the interests of the Iranian people. The general principles and positions of Iran have been explicitly conveyed to the other parties since the beginning of the negotiations. The general framework is that the United States should first lift its sanctions, then Iran verifies the lifting of US sanctions. After these measures, Iran will stop compensatory actions and resume its nuclear commitments," Rabiyee said.

"The aim of the Vienna talks is the return of the United States to the JCPOA through the lifting of sanctions and then the full implementation of the deal by all parties. The draft of all negotiation texts has been prepared and discussed in this regard," he stated.

In relevant remarks today, Iranian Foreign Ministry Spokesman Saeed Khatibzadeh rejected speculations that Tehran might change its position on the nuclear deal after the transfer of power to new President Seyed Ebrahim Rayeesi, saying that the country's stance is among the principled policies of the Islamic Republic.

"Iran's position on the Joint Comprehensive Plan of Action (JCPOA) and the lifting of sanctions is one of the principled positions of the Islamic Republic and will not change with the change of administration," Khatibzadeh told reporters in a press conference in Tehran on Tuesday.

"Therefore, if an agreement is reached, the administration of Mr. Rayeesi will be loyal to it, because contrary to the approach of some other parties, adherence to the given commitments and promises is always a principle for the Islamic Republic of Iran," he added.

"The progress made in the Vienna talks is a fact acknowledged by all parties to the talks, although there are still important issues that largely need to be decided by the other parties, especially the United States. In fact, the finalization of the agreement to revive the JCPOA depends on the political will of the other parties to make tough decisions on their part," the spokesman said on the progress of the negotiations.

"Iranian delegation seeks to reach an agreement as soon as possible and to lift the oppressive sanctions against the Iranian people. However, we do not set any deadline for reaching an agreement that serves the interests of the Iranian people. Negotiations will continue until a favorable agreement is reached for Iran. As has been said many times, we are in no hurry to reach an agreement, but we will not allow the negotiations to turn into talks of attrition," Khatibzadeh said.