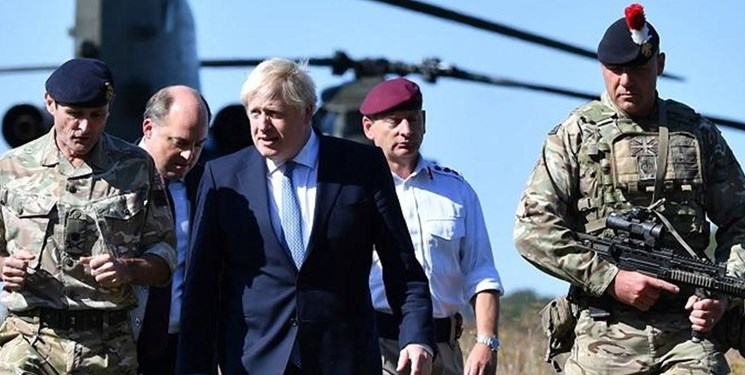 TEHRAN (FNA)- Prime Minister Boris Johnson announced the end of Britain’s military mission in Afghanistan following a hasty and secretive exit of the last remaining troops 20 years after the post 9/11 invasion that started the “war on terror”.

The prime minister confirmed to MPs that the intervention, which claimed the lives of 457 British soldiers, would end even as the insurgent Taliban have been rapidly gaining territory in rural areas as UK and other forces withdraw, The Guardian reported.

In a separate defence briefing, Head of the Armed Forces Sir Nick Carter acknowledged that recent news from Afghanistan had been “pretty grim” but said the Afghan military had been regrouping to defend urban areas.

While it was “fair to say the Taliban now hold nearly 50% of the rural districts in Afghanistan” and that the Afghan Army would also “no longer have access to [Western] air power” from within the country, he added he hoped there would eventually be peace talks between the Taliban and the Afghan government.

Britain’s 750-strong contingent, part of a wider NATO stabilisation mission, has been quietly leaving the country over the past few weeks after the US President, Joe Biden, stated he wanted to pull out most of the remaining 2,500 US combat troops.

Flag lowering ceremonies have been largely conducted in secret as British forces pulled out, the last of which took place on June 24, when the union flag was handed to the British ambassador.

Critics announced pulling out covertly was an insult to veterans who until now had been denied a final moment. Defence sources noted the secrecy was at the request of the US, citing operational security.

Although British politicians and generals, including Johnson, have said they did not want to exit at this point, Biden’s insistence and a failure by other nations to offer an alternative fighting force meant the UK and other NATO countries had to pull out.

Britain will leave behind a small number of troops to support a US-led protection force for diplomats in Kabul, although the ministry of defence would not say how many were remaining on the ground.

The RAF may become involved in providing air support from airbases outside Afghanistan, following the abandonment last week of the main Bagram base. Losing easy access to air power is a major loss of capability for the Afghan Army as it battles to fend off the Taliban advance.

The foreign office also intends to maintain an embassy in its current location in Kabul, although it will not, at least initially, be guarded by British troops. The UK government will provide £100mln of aid and £58mln for Afghan defence forces.

Carter stated that “no provincial capital has fallen” in Afghanistan and that “it is entirely possible that the Afghan government defeats the Taliban for long enough for the Taliban to realise that they have to talk”.

But he admitted that it was one of three future scenarios, the others being a return to warlordism and a Taliban victory.

Last month, it emerged that US intelligence had been assessing that the Taliban may be able to recapture Kabul in six months to 12 months after US forces departed, reflecting the pace of their recent advance.

Carter added British, US and other troops had contributed to fundamental changes in Afghanistan.

“Afghanistan now has a civil society,” Carter stated citing improvements in access to electricity, media freedom and education, where 8.2 million more children are now in school, including 3.6 million girls.

British soldiers who served can hold up their heads “very high” Carter said and paid tribute to the soldiers who lost their lives over the past 20 years. The British Army now had a new “combat ethos” learned from from fighting in Helmand.

“They were never defeated on the battlefield,” he added.