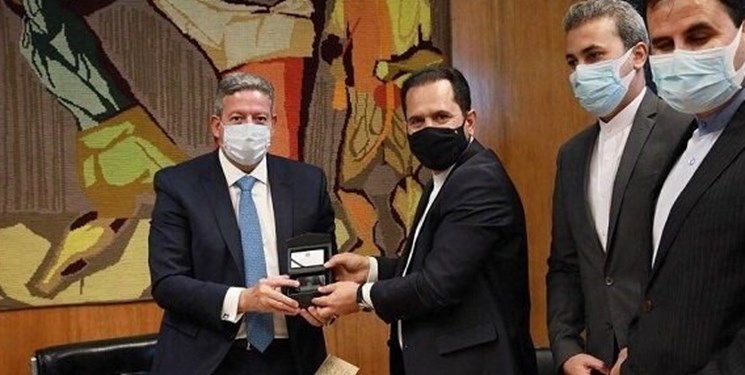 TEHRAN (FNA)- Iranian Ambassador to Brazil Hossein Qaribi and Speaker of Lower House of National Congress of Brazil Parliament Arthur Lira in a meeting in Brasilia underlined the need to develop bilateral relations in economic and trade fields.

During the meeting in the Brazilian capital on Saturday, Qaribi and Lira exchanged their views on the outlook of economic relations between the two countries.

During the meeting, the Iranian ambassador emphasized the important role of the  two countries' parliaments in helping the development and diversification of trade between the two countries.

Speaker of Lower House of National Congress of Brazil Parliament, for his part, placed special emphasis on the status and role of parliaments in the foreign policy field and expressed his readiness to broadening parliamentary ties between the two countries.

In a relevant development in September 2020, Qaribi and Governor of the Mato Grosso State of Brazil Mauro Mendes in a meeting in Brasilia underlined the need to develop bilateral relations in the fields of agriculture, extraterrestrial agriculture, and agricultural products.

During the meeting in the Brazilian capital, Qaribi and Mendes explored avenues for bolstering and reinvigorating mutual cooperation in the fields of agriculture and extraterrestrial agriculture.

Referring to the high economic potentials of Mato Grosso State, the Iranian ambassador underlined his country's readiness to maintain, expand and diversify economic relations with the Brazilian state, specially in the agricultural products fields.

Mendes, for his part, pointed to Iran's position in trade with Mato Grosso State, and expressed his readiness for paving the way for Iranian businessmen in order to use the capacities of this state.

The Brazilian official called for closer cooperation between Iran and Brazil to reach a higher level of cooperation.

After China, Iran is the second-largest trading partner of Mato Grosso which is the most important agricultural production center in Brazil.

Being Iran's first trading partner in Brazil, this Brazilian state is the largest producer of soybeans, corn, cotton, beef, and sunflower seeds.

The state's soybean production reaches 35 million tons, which accounts for 27% and 10% of the total production of this product in Brazil and the world, respectively.