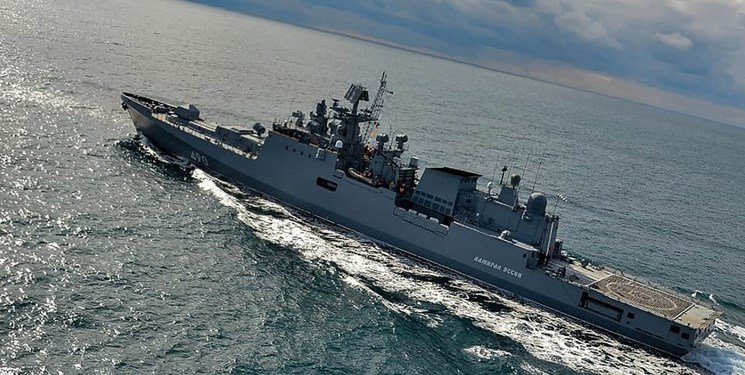 The Russian frigates held their drills as NATO wrapped up its naval exercise Sea Breeze in the Black Sea on June 28-July 10 that involved Ukraine, the United States, Canada, Great Britain, the Netherlands, Romania, Bulgaria, Greece, Turkey, Latvia and other countries. About 4,000 personnel, 40 combat ships, vessels and auxiliary craft, 30 aircraft and over 100 motor and armored vehicles were involved in the Sea Breeze 2021 maneuvers, TASS reported.

"Under the scenario of the drills, the Black Sea Fleet’s coastal surveillance and reconnaissance capabilities detected an unidentified unmanned aerial vehicle moving in the airspace along the Russian state border. The tracking equipment registered the drone’s landing on the helipad of a warship operating in the neutral waters as part of the notional enemy’s surface action group," the press office said in a statement.

The Black Sea Fleet’s command tasked the commanders of the frigates operating in the Black Sea with moving maximally fast to the area of the operation of the notional enemy’s warships to determine their further actions, the statement added.

"While approaching the designated area, the crews of the frigates Admiral Grigorovich and Admiral Essen were ‘attacked’. The frigates’ combat teams engaged in a training sea battle with the enemy and repelled a missile attack by shipborne air defense systems while employing active and passive jamming measures. Following this, the teams of the ships’ missile and artillery combat units practiced an algorithm of joint measures to eliminate surface targets by delivering missile strikes with precision weapons and artillery guns," the press office specified.

As the next stage of the drills, the frigates will hold a joint exercise with the crews of the Black Sea Fleet’s naval aviation and air defense forces for delivering missile and bombing strikes on the hypothetical enemy’s naval groups, the statement read.

The warships like the Admiral Grigorovich and the Admiral Essen represent a new series of Project 11356R/M frigates (the Project 11357 designation is also used). These frigates are designed to destroy enemy surface ships and vessels, submarines and ground installations, carry out patrols and defend sea lanes.

The frigates of this Project are armed with eight launchers of Kalibr-NK cruise missiles that are capable of striking surface, coastal and underwater targets at a distance of up to 2,600km.

The warships of this Project are also armed with Shtil-1, Palash and AK-630M air defense missile and artillery systems, A-190 100mm versatile artillery guns, torpedo tubes and RBU-6000 rocket launchers. The frigates also have a take-off and landing strip and a hangar for an anti-submarine warfare helicopter (Ka-27 or Ka-31).