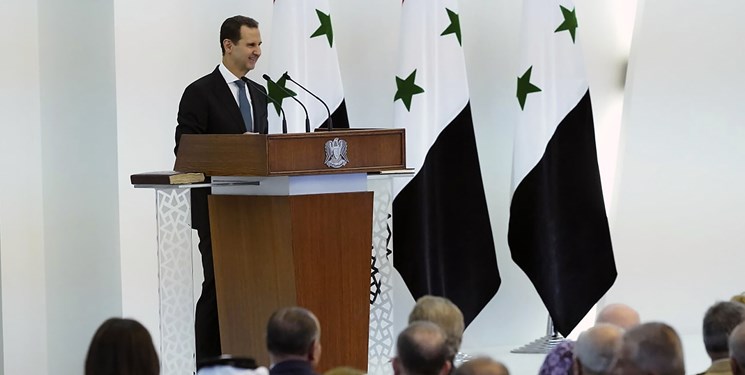 TEHRAN (FNA)- President Bashar Al-Assad on Saturday took the constitutional oath before Speaker and members of the people’s Assembly in the presence of political, party, media, religious figures and families of the martyrs and the injured.

Following the taking-oath ceremony, Assad delivered a speech saying that through your awareness and national belonging, you have proven that peoples’ determination in defending their rights won’t weaken whatsoever the colonists have prepared, they have sought to make it a chaos that burns our homeland, but, through your national unity, you have shot the coup de grace at the projects that targeted the homeland, SANA reported.

The Syrian president stressed that the popular awareness is the criterion to judge our ability to distinguish between treason and patriotism, revolution and terrorism.

Assad affirmed that stability of society is the top of postulates and anything that affects its security and safety is absolutely rejected as any society that does not consolidate or respect values ​​cannot be a stable or prosperous society.

The Syrian leader added that the Syrians inside their homeland are increasing determination and challenge, but those who were displaced and plotted to be a mere paper against their homeland have turned into a balance abroad who offer themselves at time of need… this phenomena has proven the power of the popular legitimacy given by the people to the State… it has been able to turn the occasion from a constitutional procedure into a political act that destabilized the most dangerous proposals to which our enemies have persisted since the first weeks of the war, when they tried to convince us with suspending the standing constitution at that time in order to create a vacuum that leads to chaos, in one side, through a number of  traitors of Syrians, or through messages conveyed to us by different mediators in another.

The president noted that those proposals which continue until today, and been prepared by some agents aim to reach a constitution that puts Syria at the mercy of foreign powers, but these attempts have vanished by virtue of the Syrian people’s resilience.

He stated, “I repeat call on all those who have been deceived and bet on the collapse of the homeland and on the fall of the state to return to lap of Homeland because bets have fallen and the homeland has remained."

“Our trust in our army that it will achieve liberation even after a while… and our belief in ourselves, our history and our civilization…this trust has achieved the impossible, and this is we need today to confront the economic war,” Assad stressed.

“The next stage, in the framework of investments, is to concentrate on investments in the alternative energy as the solution to the electricity problem is a priority for all of us,” he continued.

Assad added that the people who have carried on a fierce war and regained most of their lands are certainly able to build their economy during the most difficult circumstances and with the same will and determination.

“ Liberating what has remained of our land  is apriority, its liberation from the terrorists and their Turkish and US sponsors,” Assad said.

He added, “We salute and appreciate every patriotic Syrian citizen in the northeastern regions who has withstood in the face of the US occupier and tried to expel it while he was unarmed, confronted mercenary agents and offered martyrs."

“When we return to 10 years ago, all of us know what has happened in the beginning of the war, but few have analyzed the reason behind what has happened… all of us talk about the way to get out of the tunnel, or to be more realistic how to solve the problem… we have to set off for the next stage with a conclusion… it is not enough to say that our problem in Syria is terrorism, or extremism that led to terrorism, this is one side, but here I mean those who are part of the society, they are individuals who have characteristics to be integrative, but they lack the intellectual and moral reference… this reference defines the relation of the individual with his/her surrounding,” the Syrian leader continued.