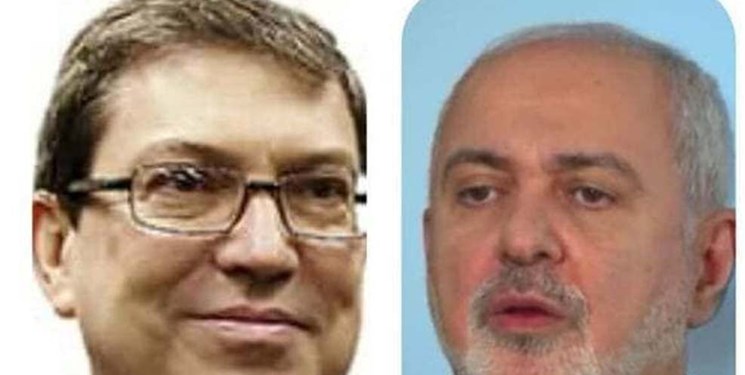 During the phone talk, the two sides discussed bilateral relations and international developments.

During the telephone conversation, Zarif slammed any foreign interference, specially by theUS, in Cuba's internal affairs.

In a relevant development earlier this month, the Iranian foreign ministry blasted the US and other western states for meddling in Cuba’s internal affairs, and called on Washington to remove unilateral sanctions against the Latin American state.

“For more than six decades, Cuba has been facing extensive sanctions [imposed on the country by] the US, which have complicated the country’s economy and living conditions of its people, especially at the time of the coronavirus pandemic,” Iranian Foreign Ministry Spokesman Saeed Khatibzadeh said.

While the US is mainly to blame for numerous problems facing the Cuban people, it pretends to support the ongoing protests in the country and intends to meddle with its internal affairs in blatant violation of international regulations, he added.

In line with its principled stance, Iran condemns any acts of interference in Cuba and the US’s “illegal sanctions” against the country, which are the main factor behind the economic hardships of the Cuban people, Khatibzadeh said.

“As a country facing illegal and cruel sanctions of the US, Iran expresses its solidarity with the Cuban people and government and calls for an immediate end to the US’s unilateral sanctions against Cuba,” the Iranian spokesperson emphasized.

A wave of protest rallies started in several Cuban cities earlier in July, drawing thousands of people to the streets to voice their grievances against President Miguel Diaz-Canel’s government at a time that the country is going through its worst economic crisis in 30 years, with chronic shortages of electricity and food exacerbated by hefty US sanctions.

The US has maintained a harsh economic, financial, and commercial embargo against Cuba for more than 60 years. Numerous resolutions by the United Nations General Assembly have indicated that the blockade is against international law.

The Cuban president had said the United States was provoking social unrest through heavy economic pressure on the Latin American state.