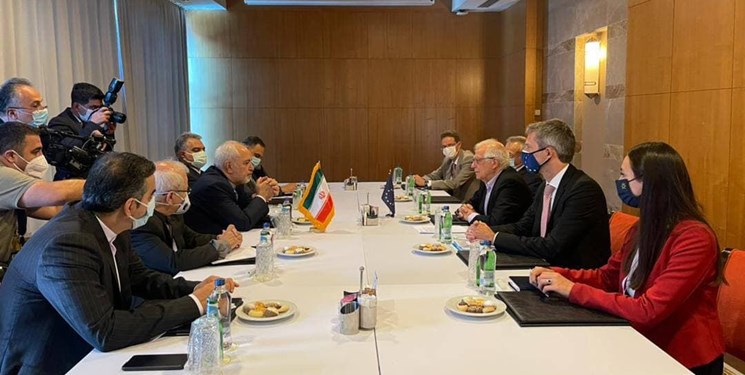 In a telephone conversation on Wednesday, Zarif exchanged views with Borrell on the nuclear deal and the latest developments in Afghanistan.

Iranian Foreign Ministry Spokesman Saeed Khatibzadeh said last Monday that the major policies of the Islamic Republic will not change by change of administrations, and the government of new President Seyed Ebrahim Rayeesi will continue talks with the world powers in Vienna.

“Negotiations in 6 rounds in Vienna proceeded powerfully and seriously, and it is natural that religious democracy is ruling Iran, and these talks were delayed due to non-implementation (of undertakings) by the US, and elections were held in Iran and it is natural to allow the government to take over and move forward due to the requirements of democracy,” Khatibzadeh told reporters in a press conference in Tehran.

“Of course, the major and principled policies of the Islamic Republic are the ones set by Supreme Leader and the mainstream bodies. The government is the executive body and the foreign ministry implements the decisions. This will continue in the normal way. It is important that the interests of people and the major decisions of the Islamic Republic will be met precisely,” he added.

“The moment that the US returns to its undertakings under Resolution 2231 and the nuclear deal and we verify it, naturally the Islamic Republic of Iran will fully resume implementation of its undertakings. We have to wait for the new government to be established,” Khatibzadeh said.