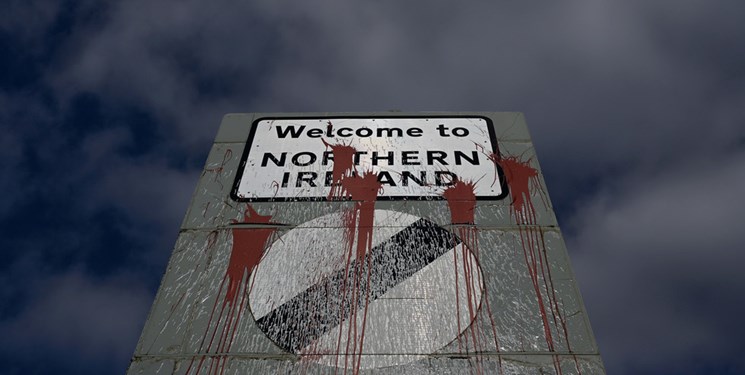 TEHRAN (FNA)- The EU rejected the UK’s demand to rip up the Northern Ireland Protocol, within three hours of the audacious demand being made in Parliament.

“We will not agree to a renegotiation of the Protocol,” said Maros Sefcovic, the European Commission’s Vice President, in an official statement, The Independent reported.

The rejection came after a new UK “command paper” insisted the agreement – hailed as “a fantastic deal” by Prime Minister Boris Johnson, when Brexit was sealed in 2019 – must be frozen and radically reworked.

The demands include abandoning full Irish Sea trade checks – due to start in October, when “grace periods” expire – and for Brussels to shelve legal action for non-implementation of existing terms.

The UK also wants the Protocol to “no longer be policed by EU institutions and courts of justice” – the bedrock for ensuring London can be punished for non-compliance, in EU eyes.

Checks would only be carried out on goods definitely destined for the Republic of Ireland – a dual-standards regime long rejected by the EU, for fear it will undermine its single market.

In the statement, Sefcovic reiterated that the Protocol was “the joint solution” reached to solve the problems provoked by “the type of Brexit chosen by the British government”.

Pointing to the overarching need to protect “the integrity” of the single market, he added, ”In order for these objectives to be achieved, the Protocol must be implemented.”

David McAllister, chairman of the European Parliament’s foreign affairs committee, underlined the gulf across the Channel, stating the EU would not allow the agreement to be “undermined”.

“The protocol was painstakingly negotiated under high political pressure, ensuring to minimise disruption and to help local communities and businesses. It cannot be renegotiated,” he underscored.

Irish Foreign Minister Simon Coveney insisted, “Any solutions must take place within the framework of the Protocol and the principles that underpin it.”

The UK demands added up to a move to renegotiate the Protocol entirely, rather than simple seeking changes to customs and animal products rules, to reduce the impact of the trade border in the sea.

Crucially, Lord Frost claimed a threshold had been passed “to justify the use of Article 16” – the mechanism that would suspend the Protocol – although the UK would not do so yet.

The Democratic Unionist Party hailed “a significant step in the right direction” and “an acceptance that the Protocol is not sustainable”.

But there was widespread criticism of the UK’s refusal to seek a compromise, the CBI calling for “mutually agreed workable lasting solutions”, including common food standards to remove checks.

The British Chambers of Commerce said, “A negotiated solution on customs, agri-food and e-commerce deliveries which deals with all of the red tape issues, is preferable to unilateral actions.”

Simon Hoare, the Conservative chair of the Commons Northern Ireland Committee, noted, “Common sense and pragmatism must not be a dirty word for either side.”

The clash opens up a two-month period – before full border controls are due to be imposed – in which the UK will test the EU’s resolve, to see if it escalates the disagreement to the courts or imposes checks unilaterally.

The UK Business Secretary Kwasi Kwarteng has accused the EU of being “inflexible” about the prospect of re-negotiating the Northern Ireland part of the deal, claiming it was not made to “last forever” in the first place.

In an interview with Sky News on Wednesday, Kwarteng backed the idea of re-negotiating the agreement. The effects of the deal were hard to predict before it actually came into force, he argued, so the parties should now be permitted to work together to make it more “smooth".

“Nobody could guarantee the effects of the Northern Ireland Protocol until we left the EU,” he stated.

"The EU have been a bit inflexible on the Protocol, and we want to see if we can make it work more smoothly," he added.

Asked by Sky News presenter Kay Burley whether the Brexit “deal’s a deal” and therefore should be respected, Kwarteng said the agreement was not designed to last ad infinitum.

Frost has told the EU that “we cannot go on as we are” and the agreement needed a “significant change".