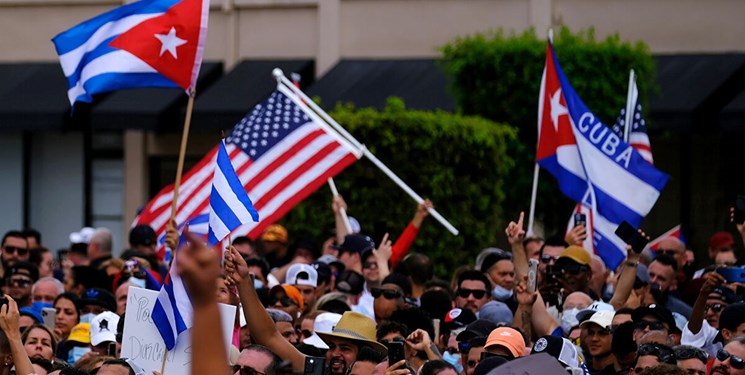 TEHRAN (FNA)- Cuba announced the United States is weaving “a Walt Disney narrative” of the recent anti-government protests in the Caribbean country, accusing Washington of seeking to justify a military intervention.

Deputy Director for US affairs at Cuba’s Ministry of Foreign Affairs Johana Tablada made the remarks in an interview with The Associated Press on Wednesday.

She criticized a series of statements by senior US officials following last week’s protests in Cuba, saying they were painting a false picture of the situation in the country.

“There is a Walt Disney narrative of a bad government and people fighting for their freedom — stereotypes that scare anyone who has never set foot in Cuba — because of their arrogance and disregard for the truth,” Tablada continued.

“They are very interested in fabricating an alternative reality because the riots of July 11 weren’t enough to justify the war that is being waged on us,” she added.

Tablada stated that while there were no current US military movements aimed at Cuba, there were signs of extreme aggressiveness similar to what led to interventions in Libya and Iraq.

“We are at a time when discourse has deteriorated to unprecedented levels,” she said, adding that “every day since July 11, senior United States officials are saying things that are not true” about Cuba.

Protest rallies erupted against the government of Cuban President Miguel Diaz-Canel almost ten days ago. The unrest came amid Cuba’s worst economic crisis in 30 years, with chronic shortages of electricity and food exacerbated by brutal US sanctions.

The Cuban government blames the economic woes mainly on a US embargo and the coronavirus pandemic.

Cuba has also held Washington responsible for the recent unrest in the country, which led to at least one death and dozens of injuries and more than 100 arrests.

Meanwhile, the administration of US President Joe Biden is considering sanctions on Cuban government officials over accusations of cracking down on demonstrators.

This is while Biden had promised during his election campaign that he would resume former US President Barack Obama’s policy of rapprochement with Havana. After entering the White House, though, Biden kept in place all the toughened sanctions imposed on Cuba by his predecessor, Donald Trump.

Meantime, Cuba is experiencing its toughest phase yet of the coronavirus pandemic. The Cuban government says the US embargo is impeding the country’s ability to purchase equipment and other supplies to deal with COVID-19.

Numerous resolutions by the United Nations General Assembly have indicated that the US blockade of Cuba is against international law.