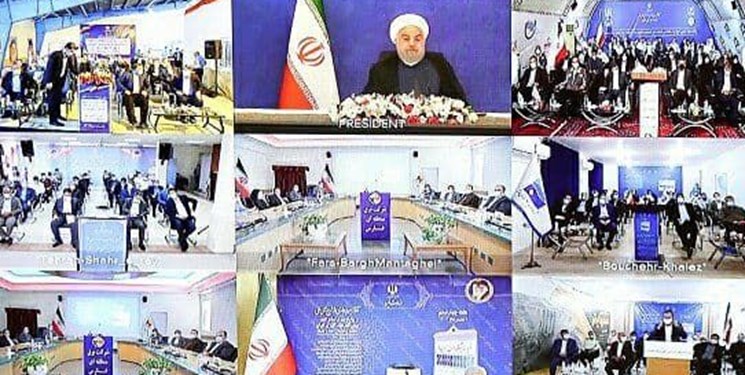 As reported the projects were opened in the South, Northwest, West, and Center of Iran.

The projects include water supply, water treatment plants, dam and power projects in the provinces of Mazandaran, Hormuzgan, Sistan-Balouchestan, Ardebil, and Fars.

In a relevant development earlier in July, several infrastructural oil projects were inaugurated in a ceremony attended by Rouhani through video conferencing.

The pipeline for the transfer of crude oil from Goreh to Jask Oil Terminal is one of the most important projects which became operational.

With the inauguration of the giant national oil project, the possibility of receiving and loading the first Iranian oil shipment from strategic Sea of Oman will be provided in history of Iranian oil industry.

For the first time in the country, all parts of the oil pipeline, as long as 1,000km, which is resistant against corrosion, was fully manufactured by expert domestic engineers, the report added.

Implementation of 1,000km oil pipeline, constructing two power stations and 230km power transmission line, manufacturing giant 2.5-megawatt pumps for the first time in the country, as well as construction of oil terminal for loading crude oil from Makran shores are of the most important projects which were inaugurated today.

Implementation of the oil projects will create employment opportunities both directly and indirectly for job-seeking people in the country.

By operating the national and strategic project to transfer Goreh crude oil to Jask Oil Terminal and arrival of oil to Makran coastal areas, in addition to diversifying export terminals, sustainable development and job creation will be provided with the construction of refineries and petro refineries.

With the start of crude oil exports from Jask in the Sea of Oman, in addition to reducing the number of tankers to load crude oil, the Islamic Republic of Iran has the opportunity to export oil with more security and more stability.

Iran had also on Monday inaugurated hundreds of infrastructural and development projects in the fields of production and agriculture in a ceremony participated by Rouhani via video conferencing.

585 production and infrastructural projects of the Ministry of Agricultural Jihad were inaugurated throughout Iran.

The projects were officially inaugurated to produce agro-food and aquatic products and conversion industries throughout the country.