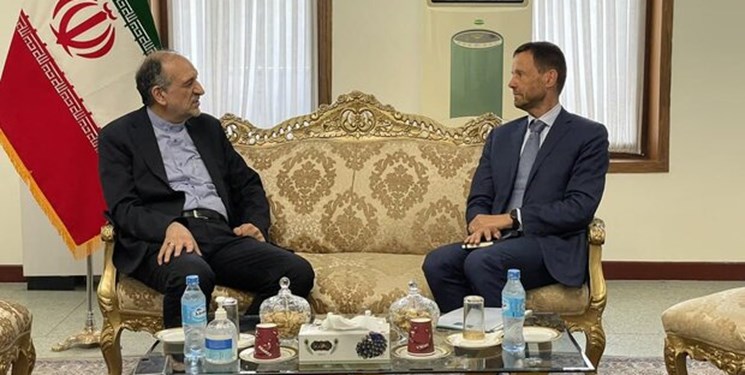 TEHRAN (FNA)- Iranian and EU officials in a meeting in Kabul on Wednesday conferred on ways to promote peace and security in Afghanistan.

The meeting was held between Iranian Ambassador to Kabul Bahador Aminian and European Union's Special Envoy for Afghanistan Tomas Niklasson.

During the meeting, the two sides discussed multilateral cooperation to advance the peace process in Afghanistan, also the increasing level of violence in the country.

During the meeting in Kabul, Taherian Fard and Atmar explored avenues for bolstering and reinvigorating bilateral relations.

Appreciating the positions of the Islamic Republic of Iran in supporting the peace process in Afghanistan, Atmar explained about an end to the violence and arbitrary killings, torture of civilians and human rights abuses in Taliban-held areas.

Atmar termed the political, economic, cultural and trade cooperation between Kabul and Tehran as an important necessity for the governments and people of the two countries, calling for the strengthening of cooperation in various fields, specially the peace process in his country.

Taherian Fard voiced the support of the Islamic Republic of Iran for the peace process in Afghanistan while preserving the achievements of the last two decades, and said Iran is eager to further strengthen cooperation between Kabul and Tehran in various fields, including border cooperation and to establish more coordination between the relevant departments of the two countries.