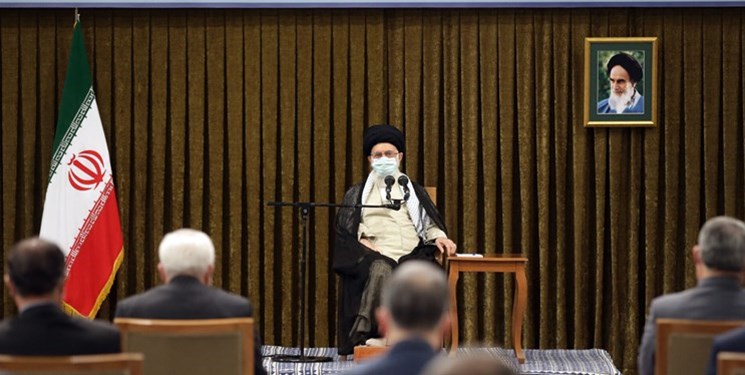 TEHRAN (FNA)- Supreme Leader of the Islamic Revolution Ayatollah Seyed Ali Khamenei said on Wednesday that experience of the nuclear deal with the western states in the past 8 years proved the West is not trustworthy, and advised the new government to take a lesson from the Rouhani administration's talks with West.

“A very important experience in this period (8-year-long presidency of Hassan Rouhani) that the future generations should use is distrust of the West,” Ayatollah Khamenei said, addressing the last meeting with outgoing President Hassan Rouhani and his cabinet members in Tehran.

"By including this sentence, they want to provide an excuse for their future meddling with missile and regional issues throughh the nuclear deal, and if Iran refuses to discuss them, they will say that we have violated the agreement and there will, hence, be no agreement," Ayatollah Khamenei said.

A senior political analyst said earlier this week that the negotiating team of US President Joe Biden is after an updated version of the nuclear deal with Iran, and called on Tehran to start using pressure levels against Washington to make it comply with its undertakings.

“The Biden team is looking for an updated version of the nuclear deal, of course, to increase the advantages for the US. It expects Iran to do even more than it agreed in 2015, but does not want to make concessions even as much as it did in 2015,” Seyed Mostafa Khoshcheshm said.

He added that the American side, specially since 2018 and withdrawal from the nuclear deal, has fortified sanctions wall by adding up multiple layers to the secondary nuclear sanctions in violation of the Joint Comprehensive Plan of Action paragraph 25, “which means that even if the nuclear sanctions are practically lifted, it will not affect our economy, but makes our economy hostage to the US formula”.

“In addition, the US wants assurances that Iran will immediately enter into regional and missile talks,” Khoshchesm said.

“Still there is no guarantee that the US will stay in compliance with its undertakings. The guarantee is in our own actions, i.e. the concessions that the US wants to receive from Iran, and this rule is true not only in Iran’s case but also in all international treaties. If the other side gives even 100% verbal and written assurances, keeping the leverages of pressure in our hands is necessary,” he added.

“We have to keep our pressure tools under a well-calculated plan,” Khoshcheshm said, adding, “This time we should display that we have learnt the lesson and never accept to lose these leverages. That is why in the Vienna talks, one of the conditions of the Iranian government is that the American side should first lift all sanctions and then Iran will verify them for a few months and then begin to fulfill its obligations.”