Iran Blasts US for Setting Conditions to Remove Sanctions 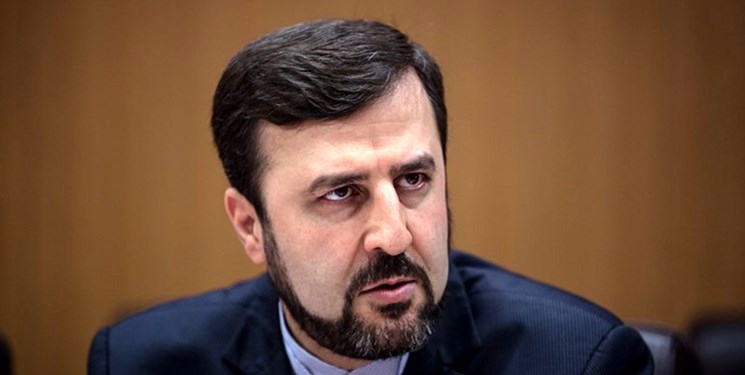 Qaribabadi made the remarks in an interview published on Ayatollah Khamenei’s official website, Khamenei.ir, on Wednesday.

He referred to the warning issued by Ayatollah Khamenei on Wednesday, during the Leader’s last meeting with the outgoing Iranian administration’s officials.

Qaribabadi went on to offer some details about the controversial provision and the reasons why it was completely unnecessary.

This is while there is no need for either, the envoy said.

The nuclear deal has its own timetables that ensure implementation of its purposes, he said, adding the other demand runs strictly counter to the talks’ agenda too.

Therefore, the Iranian side roundly rejected the proposal since this insistence “showed that they still consider the nuclear agreement to be a bridge enabling their interference in irrelevant issues such as Iran’s missile work and its regional affairs,” noted the diplomat.

“The purpose they seek through this is to start addressing these [irrelevant] issues [on various occasions] and consider them to be indivisible parts of the nuclear deal, and [therefore] lay the groundwork for their interference in these areas,” Qaribabadi wrote.

Thus, wherever, the Western side stopped short of its goals, it would be able to start blaming Iran and begin trying to put it under more pressure, he cautioned.

The official echoed the Leader’s remarks during the Wednesday meeting that such insistence on the part of the Americans had come while they, themselves, had “refused to retrace even one step towards reversing their adversarial stance concerning Iran.”

Among many other things, the diplomat said, they conditioned the lifting of some of the sanctions and the removal of Iran’s Islamic Revolution Guards Corps (IRGC) from their so-called blacklist on Iran’s resigning itself to the provision.

Neither did they agree to recognize an overdue end to an embargo on sales of conventional weapons to Iran, nor approve of lifting their bans on more than 500 Iranian natural and artificial persons, the envoy also underscored.

Qaribabadi went on to delineate Iran’s counter-approach in the face of the West’s attempted inroads.

He said that during the whole time while the West had been either violating its commitments to the deal or trying to bring Iran under new pressure, the positions adopted by the country’s Islamic establishment and a law ratified by the Parliament mandating further remedial nuclear steps on the part of the Islamic Republic had, in turn, improved the country’s standing in the talks.

Now, faced with the West’s new pressure tactics, the country would try, on the one hand, to guard its improved standing, and advance its interests on the other, Qaribabadi said.

Towards the purpose, the country would never lose sight of the fact that it was the US that began compromising the JCPOA in the first place, “so care should be exercised for the complainant and the defendant’s rolls not to be switched here,” the envoy added.

Besides, the Islamic Republic prioritizes insistence on the practical and verifiable removal of the sanctions on its agenda, and also tries to ensure that the US would never be able to redeploy the sanctions weapon against it either, he said.

Thirdly, Tehran would resolutely stand by its assertion that neither the talks nor the nuclear deal are allowed to feature any irrelevant subject matters such as Iran’s defensive missile program or its regional influence, the envoy said.

“No Iranian official or institution stands against achievement of a good deal that would bring about practical removal of the sanctions. However, given the past experience, one should tread more vigilantly and more perceptively,” Qaribabadi said in conclusion.

Supreme Leader of the Islamic Revolution Ayatollah Seyed Ali Khamenei said on Wednesday that experience of the nuclear deal with the western states in the past 8 years proved the West is not trustworthy, and advised the new government to take a lesson from the Rouhani administration's talks with West.

“A very important experience in this period (8-year-long presidency of Hassan Rouhani) that the future generations should use is distrust of the West,” Ayatollah Khamenei said, addressing the last meeting with outgoing President Hassan Rouhani and his cabinet members in Tehran.

"By including this sentence, they want to provide an excuse for their future meddling with missile and regional issues throughh the nuclear deal, and if Iran refuses to discuss them, they will say that we have violated the agreement and there will, hence, be no agreement," Ayatollah Khamenei said.

A senior political analyst said earlier this week that the negotiating team of US President Joe Biden is after an updated version of the nuclear deal with Iran, and called on Tehran to start using pressure levels against Washington to make it comply with its undertakings.

“The Biden team is looking for an updated version of the nuclear deal, of course, to increase the advantages for the US. It expects Iran to do even more than it agreed in 2015, but does not want to make concessions even as much as it did in 2015,” Seyed Mostafa Khoshcheshm said.

He added that the American side, specially since 2018 and withdrawal from the nuclear deal, has fortified sanctions wall by adding up multiple layers to the secondary nuclear sanctions in violation of the Joint Comprehensive Plan of Action paragraph 25, “which means that even if the nuclear sanctions are practically lifted, it will not affect our economy, but makes our economy hostage to the US formula”.

“In addition, the US wants assurances that Iran will immediately enter into regional and missile talks,” Khoshchesm said.

“Still there is no guarantee that the US will stay in compliance with its undertakings. The guarantee is in our own actions, i.e. the concessions that the US wants to receive from Iran, and this rule is true not only in Iran’s case but also in all international treaties. If the other side gives even 100% verbal and written assurances, keeping the leverages of pressure in our hands is necessary,” he added.

“We have to keep our pressure tools under a well-calculated plan,” Khoshcheshm said, adding, “This time we should display that we have learnt the lesson and never accept to lose these leverages. That is why in the Vienna talks, one of the conditions of the Iranian government is that the American side should first lift all sanctions and then Iran will verify them for a few months and then begin to fulfill its obligations.”