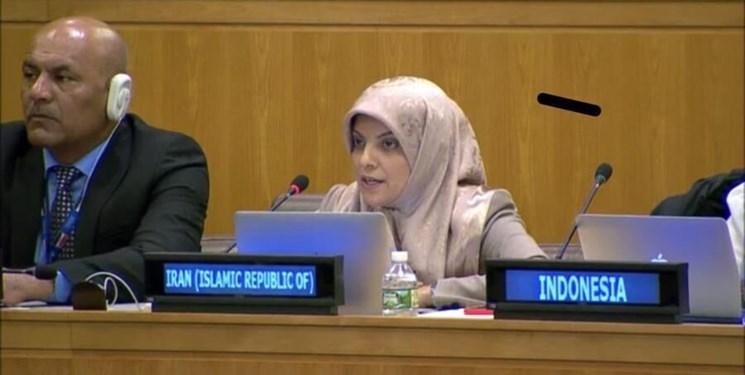 TEHRAN (FNA)- Deputy Permanent Representative of the Islamic Republic of Iran to the United Nations Zahra Ershadi called on the UN Security Council to make the Zionist regime account for several decades of crimes against the Palestinians.

“The history of mankind testifies that when unlawful acts go unpunished, they repeat. Therefore, the Israeli regime commits all such crimes with total impunity, because, for well over seven decades, the Security Council has been dead silent against all unlawful acts committed by that regime, and the Council’s decades long utter and inexcusable inaction has seriously emboldened that regime to commit more crimes with more brutality,” Ershadi said, addressing a meeting of the UN Security Council on ‘The Situation in the Middle East, including the Palestinian Question’ on Wednesday.

“Since the previous quarterly open debate of the Security Council on the situation in the Middle East, including the Palestinian question, the situation in Palestine has drastically been aggravated due to the unlawful policies and barbaric practices of the Israeli regime, including desecration of Al-Haram Al-Sharif, confiscation and demolition, seizure and confiscation of Palestinian homes, as well as the killing and wounding thousands of Palestinians in the West Bank and the Gaza Strip by the Occupying forces,” she said.

“For example, only in its 11-day brutal and all-out war on Gaza in May 2021, Israeli forces killed 256 Palestinians, including 66 children and 40 women. This includes 13 members of an extended family who have been killed and buried in the rubble of their own home -- many of whom were children, one as young as six months.”

According to the United Nations Office for the Coordination of Humanitarian Affairs (OCHA), almost 2,000 Palestinians were also injured during attacks on Gaza, including “over 600 children and 400 women, some of whom may suffer from a long-term disability requiring rehabilitation”, Ershadi said.

“The Israeli regime also continues to commit the most systematic and gross violation of the rights of child. According to the annual report of the Secretary-General, in 2020, the United Nations verified 1,031 cases of grave violations against 340 Palestinian children, including killing 11, maiming 324 and detaining 361.”

“Additionally, as reported by the Secretary-General, from first April 2020 to 31st March 2021, “4,450 Palestinians were held as “security prisoners” in Israeli prisons, including 140 children, 37 women and 10 members of the Palestinian Legislative Council”. In a barbaric act on 8 July 2021, Israeli troops detonated explosives, destroying the family home of a Palestinian prisoner, Muntasir Shalabi, the Iranian envoy said.

Furthermore, one of the unlawful and brutal actions of the Israeli regime has been the confiscation and demolition of Palestinian homes. According to the Secretary-General, from first April 2020 to 31st March 2021, “Israeli authorities demolished 1,015 Palestinian-owned structures. Demolitions more than tripled during Ramadan in 2020, compared with the same period in 2019”. Such measures “resulted in the displacement of 1,255 Palestinians, the majority of whom were women (296) and children (666, including 305 girls)”, she added.

“On 7 July 2021, the Israeli regime entirely demolished the Palestinian village of Humsa al-Fawqa for the fifth time.”

During its 11-day attack on Gaza in May 2021, the Israeli regime destroyed over 2,300 housing units and, according to OCHA, “an estimated 16,250 housing units sustained some degree of damage, as did multiple water and sanitation facilities and infrastructure, 58 education facilities, nine hospitals and 19 primary healthcare centers”, the ambassador said.

Likewise, in referring to the brutalities of the Israeli regime, one must not lose sight of the blockade of Gaza, imposed since 2007, which, according to the Secretary-General, “continues to severely restrict the movement of persons and goods to and from Gaza, and has affected every aspect of Palestinians’ rights, including freedom of movement, the right to life, the right to health, the right to an adequate standard of living and the right to food”, and also according to the “Report of the Special Committee to Investigate Israeli Practices Affecting the Human Rights of the Palestinian People and Other Arabs of the Occupied Territories”, by undermining all aspects of a viable economic and social life, “has transformed Gaza from a low-income society with modest but growing export ties into the regional and international economy to an impoverished ghetto with a decimated economy and a collapsing social service system”, she said

As clearly stated by the Secretary-General, in his note on “economic and social repercussions of the Israeli occupation on the living conditions of the Palestinian people in the Occupied Palestinian Territory, including East Jerusalem, and of the Arab population in the occupied Syrian Golan”, the blockade “may amount to collective punishment, which is prohibited under international law.” Yet, the Israeli regime occasionally continues striking Gaza strip, the envoy said.

Of course, these are only the tip of a submerged iceberg of the inhumane crimes and unlawful practices committed by the Israeli regime against the Palestinians, constituting war crimes and crimes against humanity, and entailing international responsibility of the Israeli regime, whose officials must therefore be brought to justice for committing such heinous crimes, Ershadi said.

“Moreover, we must also refer to the continued destabilizing measures and military adventurism of the Israeli regime in the region, clear examples of which are the continued occupation of the Syrian Golan and parts of Lebanon as well as systematic violation of the sovereignty of these two countries in contravention of international law, particularly Article 2(4) of the United Nations Charter.”

“The history of mankind testifies that when unlawful acts go unpunished, they repeat. Therefore, the Israeli regime commits all such crimes with total impunity, because, for well over seven decades, the Security Council has been dead silent against all unlawful acts committed by that regime, and the Council’s decades long utter and inexcusable inaction has seriously emboldened that regime to commit more crimes with more brutality,” she added.

“At the same time, it is evident that the decades-long silence and inaction of the Security Council against such grave breaches of the peace constituting a serious threat to international peace and security, is because of the fact that the United States has systematically shielded the Israeli regime against any action by the Council, one example of which is the use of veto for 44 times to prevent the adoption of draft resolutions of the Security Council against Israel; unprecedented in the Council’s history. The latest example of such measures was the act of the United States, in May 2021, in blocking the Security Council from issuing even a simple press statement calling for an end to Israel's bombardment of Gaza.”

“Such unwavering support for Israel by the United States is against the inherent rights of the oppressed Palestinians, including their right to life, to dignity, to liberation, to self-defense, to self-determination, and to establish their own independent State,” Ershadi said.

“The Security Council must put an immediate end to this unjustifiable and unacceptable trend and to compel the Israeli regime to cease, immediately and completely, all its crimes against Palestinians; remove the unlawful and inhumane blockade of the Gaza Strip; end the occupation of all Palestinian territories, the occupied Syrian Golan and parts of Lebanon; and also, to hold that regime accountable for committing the gravest international crimes for over several decades.”

“Condemning, in the strongest possible terms, all crimes of the Israeli regime against Palestinians, the Islamic Republic of Iran reiterates its support for the just cause of the Palestinian people and the full realization of all their inalienable rights, particularly their inherent right to self-determination and to establish an independent Palestinian State throughout Palestine, with Al-Quds Al-Sharif as its capital,” she added.

“In conclusion, I would like to recall the thirty-ninth anniversary of the abduction of three members of the Embassy of the Islamic Republic of Iran in Beirut, as well as an Iranian journalist, who were captured in July 1982 during the occupation of Beirut by the Israeli regime. There are various news reports and indications that, after being stopped and detained in north of Beirut, which was then under the occupation of the Israeli regime, the said Iranians were immediately handed over to the Israeli military forces. Likewise, there are various pieces of evidence, including assertions by some of those who were in Israeli prisons and released later or have visited the prisons, suggesting that they are still alive and are in the hands of the Israeli regime, We underline the responsibility of the United Nations in properly addressing this criminal act as well as its assistance in returning the abducted diplomats and journalist to Iran,” she added.

“Finally, in his statement today, the Israeli regime’s representative once again played victim, and to distract attentions from the brutal crimes that it continues to commit, accused others in the region and the world. Instead of proposing to address the challenges of others, the Israeli regime must stop murder and bloodshed and cease expanding its terrorist activities to entire region. Israel’s accusations regarding Iran’s peaceful nuclear program are completely absurd, irrelevant and baseless and its objective is to cover up the danger that the nuclear weapons of this regime pose to the region and beyond. To remove this threat, the international community must compel that regime to renounce the possession of nuclear weapons, join the Treaty on the Non-Proliferation of Nuclear Weapons and put all its nuclear activities and facilities under the comprehensive safeguards of the International Atomic Energy Agency. Other accusations of the Israeli regime’s representative were mere fabrication and disinformation too,” Ershadi said.

In relevant remarks in March, Iran's Ambassador and Permanent Representative to the Vienna-based International Organizations Kazzem Qaribabadi criticized the International Atomic Energy Agency (IAEA) for inaction towards the nuclear threat posed by Israel, stressing that Tel Aviv enjoys the advantages of Non-Proliferation Treaty (NPT) while it is has never signed the pact.

Israel enjoys more preferential advantages compared to the nuclear-armed states because the latter are NPT members and have special commitments, while Israel is out of it, is free of any commitments, and enjoys all the advantages of the Agency which are relevant to the NPT, Qaribabadi said.